With the Boatzz and the Twilight. Wednesday, June 9, at the Beachland Ballroom. 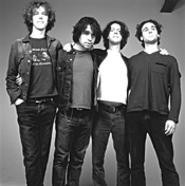 Longwave
There's nothing wrong with Longwave. Maybe that's why it's been so hard for the Brooklyn band to muster much passion. If the Strokes and the Rapture are to New York City's hipster rock scene what Oasis and Blur were to Britpop, Longwave seems destined to play the part of Mansun: Just fine. On the other hand, you could put a dark-horse bet on the band to pull a Radiohead and leap into the musical unknown, taking the entire scene with it; on the evidence of last year's LP, The Strangest Things, Longwave's ambitions arc in that direction. Singer Steve Schlitz has a thing for vaulting pop choruses, and his band isn't content to play its garage-pop cards straight, opting instead to splinter the sound into prismatic shambolics. They aren't great yet, but Longwave could be -- the songs' dimensions come into brighter relief live, and anyway, it's always a good sign when a band's members bang their heads against their music's predominant influence, in an anxious attempt to get out from under it. The just-released EP Life of the Party might stack the deck one way or another, but all things considered, Longwave is worth a gamble.