Known for his six-hour sets, Tiësto is the new superstar DJ. 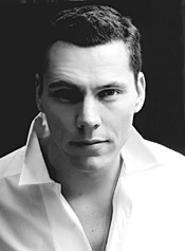 Border-crossing beats: Tisto has spun everywhere from Vietnam to the Dominican Republic.
Dutch DJ Tiësto, who headlined what his publicists claim was the biggest show by any DJ in history -- 25,000 in Holland last year -- recently spun in front of a tougher audience to please, all 10 of them. They were old Vietnamese men sitting behind a table. At the other end of the room, he played trance records for half an hour. The 10 men, among them a classical composer and a few translators, were evaluating whether or not he should be allowed to perform in their country.

The officials had never heard electronic music before, but they liked what he played and approved Tiësto's brand of trance, which is about as politically charged as a cosmetologist's convention. He was only the second international DJ to play there -- the country is so poor, says Tiësto, that even when he agreed to spin for free, the promoters still couldn't afford his plane ticket. (His sponsor, Heineken, had to foot the bill.) At the show, it took the attendees a while to get into the music, since it was totally foreign to most of them.

There's something of a race going on in the international trance scene, although the DJs involved avoid talking about it as such. It's bragging rights for Tiësto to have introduced the music to Vietnam, just as Paul Oakenfold will boast about throwing the first big party at the Great Wall of China, and Sasha will release mixed CDs named after all sorts of exotic locales. Tiësto mentioned in a recent interview that he had just played an amazing gig in the Dominican Republic, on the beach, for just a few hundred people. As dance music is increasingly globalized, everyone wants to be the ambassador to this or that far-flung land. Trance is especially well suited for crossing borders, because its songs either lack vocals or feature lyrics so vacuous as not to warrant translation.

Among trance DJs, this need to distinguish themselves from one another can be obsessive. The press materials that accompany Tiësto's newly recorded sophomore album Just Be mention three separate times that he won the No. 1 spot in DJ magazine's readers' poll for 2002 and 2003. Such rankings are often hard to make heads or tails of, because the top 20 or so usually all play the same kind of music -- for the last five years or so, it's been trance -- and play it in the same way -- subtle, super-long blends, built around two or three peaks.

Often, what one jock claims as a distinctive calling card might seem like small potatoes to outside observers. Articles written about Tiësto frequently mention that what sets him apart is that he plays mostly his own tracks and remixes rather than records from other producers. "That's where I'm heading to more and more, playing my own stuff and not so much other people's," he says. "It brings something extra to being a DJ, not to just play anybody's records, because anybody can do that. It makes it more special."

A cynic would argue that the cream of the trance crop have to focus on these small differences between one another, because the music itself is so homogeneous and resistant to change. Close your eyes at one of the world's super clubs, and it could be Oakenfold, Digweed, Tall Paul, Christopher Lawrence, Sandra Collins, or Tiësto behind the decks for all you could tell. Music critics are flummoxed by this interchangeability, because critics, like baseball-card collectors, want to file artists according to their unique characteristics. Writers also get jammed up by the general lack of envelope-pushing that's endemic to the scene. And why does it all have to be so damn happy all the time?

But Tiësto, who is especially known for playing joyful, uplifting tunes, argues that there's a time and a place for dreary and experimental music -- it's just not on the dance floor. He told a critic in an audio interview for the BBC's website that he loves Radiohead, but not in the club after a week of working. For him, the DJ's obligation is to give the kids a good time, not to push them past their comfort zone.

"Last year, the whole dance scene in general lost its charm, because there was too much progressive music," he told his interviewer. "DJs were playing too much cool music because they had to, because the magazines were shrugging off trance and all the happy music. And the crowds didn't go off anymore."

The point is a compelling one, although it should be noted that innovative music occasionally can make the crowd go off. But one of the main uses of a club is as an escape, and it's important to remember that there are boundaries within which superstar DJs must operate.

Even working within these crowd-pleasing parameters, Tiësto has managed to push things forward a bit. At the 25,000-person show he played last year, which was caught on his In Concert DVD, he played the part of DJ as conductor, bringing a band onstage, segueing singers into his mixing, and incorporating a multimedia visual show.

"I want it to be more like a proper show," he explains. "That's the next step, I think, for DJs, because DJs are supposed to be the new rock stars, but most of them just play records from anybody. I've tried to make myself more of an artist DJ and collaborate with other musicians. I still mix records, because it sounds better when you play it from a record or a special edit from CD [than play electronic gear live], but you make it more special by using your own tracks and live playing."

It's this willingness to expand the standard DJ two-turntables-and-a-mixer toolbox, as well as his buoyant spirit, that ultimately sets Tiësto apart from his contemporaries. The latter attribute is significant for trance fans. As the older guard of DJs gets more pampered and jaded, fresher faces like Tiësto's (he hit the international scene later, not becoming known outside of Holland until 1998) stand out. One British vacationer who had come to club culture's annual three-ring circus in Ibiza sang Tiësto's praises on a BBC message board for this particular reason. "I was lucky enough to be in the V.I.P. area (at Cream), and [Oakenfold] was just slumped on the decks, propping up his chin with his hand and totally uninterested in the people below," he wrote. "Couldn't believe it. Tiësto smashed it and showed what a professional DJ is all about."