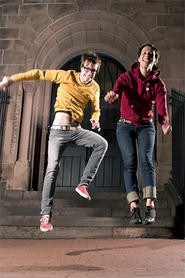 Matt and Kim are just totally fun. Totally. Like a power-pop take on They Might Be Giants, with a (simulated) accordion and everything. They're even from Brooklyn, where they've developed a loyal following at loft parties, basements, art galleries, and clubs. They accurately describe their live sets as having the vibe of "an onstage pizza party." And they're so energetic, it's hard to sit still through their songs -- so while you should check them out at www.MySpace.com/MattAndKim, don't do it at work, because you'll start a pogo fest, and people two floors below will complain about the deafening noise from everyone shouting along. Seriously: Take a listen to "Yea Yeah." You'll smile from now until the show. And probably for a week after. At least.