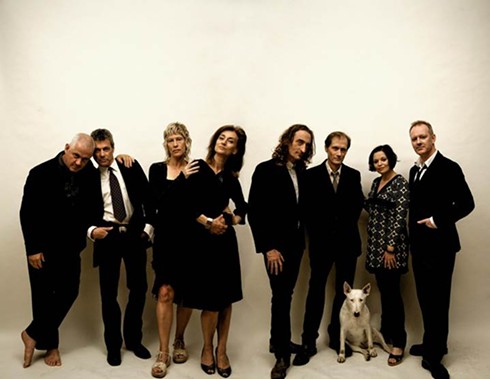 Courtesy of Bloodshot Records
Mekons singer Sally Timms admits it’s “nigh on impossible” these days to get the motley crew that makes up the Mekons to embark on a tour together. Since members are spread out all over the globe (the band formed in England in the '70s but some members now live in the states), it requires a certain amount of coordination to bring all the members together as the group is doing for this summer's short full band tour that includes a stop at the Music Box Supper Club.

“It’s really difficult,” says Timms via phone from the Chicago law office where she works as a paralegal. “It’s always been difficult because of the logistical constraints of having a band separated by two different continents, almost three with [guitarist] Lu [Edmonds] in Siberia. It gets more and more difficult as we get older to make the time to get together. Even if it wasn’t that difficult, we wouldn’t be going on tour once a year in the U.S. It would be a pointless endeavor to do that. All things considered, it works out fine that every four or five years we manage to get together as a group. It’s a strange and hairy process.”

Last year, the group went to Scotland, and [singer] Tom [Greenhalgh] and Edmonds said they couldn’t go. But then Edmonds said he could go and Greenhalgh showed up halfway through the tour, so it turned into a tour featuring the entire band.

“This is how this band operates,” says Timms with a laugh. “It’s basically do what thou wilt.”

And yet despite the fact that members live on different continents, the current Mekons lineup has essentially remained intact since the mid-’80s when it issued a string of terrific albums such as The Mekons Rock ‘n’ Roll and Fear and Whiskey, albums that blended punk rock and alt-country in a novel manner. With their bellowing vocals and folk-y instrumentation, Fear and Whiskey songs such as “Last Dance,” “Flitcraft” and “Darkness and Doubt” sound like the Pogues if they were a post-punk band inspired by Gang of Four. Timms, who has a supple voice perfectly suited to singing country ballads, says band leader Jon Langford was the one who encouraged her to become a balladeer.

“To be honest, the country side has more to do with Tom [Greenhalgh] and Jon [Langford] than it has to do with me,” Timms admits. “Jon encouraged me to sing country because he was into it, and my voice is suited to it. I can’t claim any real knowledge of the American country genre. I once sat with [label founder] Rob [Miller] from Bloodshot and he played me some music, and I said, ‘This is nice. What is this?’ He looked at me in horror and said, ‘It’s Hank Williams.’”

One critic claimed the Mekons are the band that took punk’s ideology the most seriously. Timms says she can’t speak for other acts, but she does admit that a punk aesthetic informs everything they do.

“All of our decisions — even lifestyle decisions to a certain extent — are based on those ideas, which are really various actually,” she says. “It’s hard to pinpoint, but it’s the idea that you’re not reliant upon someone else to make something happen is really fundamental to punk. The idea that you really can do it yourself was a game changer for a lot of people who didn’t grow up as trained musicians. You could be in a band and you could go on tour and make records. You weren’t reliant on the machine to do it. You could do it yourself.”

During its 30-year run, the band hasn’t sold a ton of records. And while some dates on the current tour are already sold out, others haven’t generated much interest. So what keeps the band together?

“People ask us that,” says Timms. “It’s not that hard. It depends on the constraints. If you want to function like a normal band and sell records and tour three months of the year or more, it would have imploded. We don’t do that. We [tour and record] when we want to, so we are enthusiastic about it. The reality is we like each other and then get to trot off to different parts of the world and play music for people and make music. I can’t think of a nicer way to spend an occasional holiday.”

The band is described as “musical miscreants” in press materials, and Timms embraces that term, at least to an extent.

“I don’t know how badly behaved we are at this point. We’re all pretty well behaved,” she says. “No one has had to go rehab — yet. Who knows? Maybe when we’re in our eighties. We might end up doing things backwards.”