We like you just the way you are. So lose the hot pants. 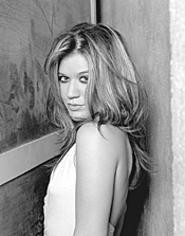 Kelly Clarkson: The idol for every little girl who doesn't have the money for designer duds or the looks to be a waifish supermodel.
Dear Kelly,

I apologize for writing all of this stuff to you in a letter, but I couldn't snag any phone time with you. Being the first-ever American Idol and embarking on this big, huge tour must mean your schedule is utterly packed. I can relate -- I mean, yesterday I had to juggle grocery shopping and catching up on my TIVO'd episodes of America's Next Top Model. Totally exhausting.

I've been such a fan of yours ever since you ditched your job as a waitress and a movie-theater employee in Nowheresville and tried out for American Idol. Okay, by "Nowheresville," I mean Burleson, Texas -- and I've driven through there, so I can call it that with authority. You had such guts to try out for the show -- even though after high school you tried making it in Hollywood, and your biggest claim to fame was playing a college girl in Issues 101, a terrible movie that had something to do with a gay guy pledging a straight frat.

Anyway, my family and I watched AI religiously every week that first summer, and you were always our favorite. I totally teared up when you won over that smarmy showboat, Justin Guarini. Heck, I even saw your lame spring-break-romance/ Grease-knockoff movie with that Brillohead in the theater -- okay, full disclosure: I was really drunk and don't remember anything about it. Moving on!

But Kelly, Kelly, Kelly (as head judge Randy Jackson always said to you), I wanted to talk to you about your music. Something changed after you got your record deal. Now, you're a musical chameleon, trying on various personas like outfits for a hot date. Apparently, someone told you that being a nice person and a talented pop singer -- the hooks that made you so endearing to Idol audiences -- just isn't enough to sell records.

On the minimalist funk of "Miss Independent," your first single, you sounded exactly like Christina Aguilera, who co-wrote the track. The rest of the songs on your debut, Thankful, just sounded like watered-down hip-hop that LaToya Jackson wouldn't even touch -- with the exception of "Low," a booming country rocker that your Texas neighbors would blast.

Even though the music is vastly more interesting on your second disc, Breakaway -- perhaps due to collaborations with ex-Evanescence guitarist Ben Moody -- your vocals often sound exactly like my homegirl, Avril Lavigne. While not necessarily a bad thing, too many of your songs sound like the generic rock-pop hybrids Hilary Duff, Lindsay Lohan, et al. use to pretend they're "edgy." The ballad "Because of You," about your parents' divorce, and the title track are clearly the best songs on the album -- and that's because they offer personal insights that hark back to the little-girl-escapes-small-town vibe of Thankful's "A Moment Like This."

Don't get me wrong, you still have massive crossover appeal. I mean, my dad listens to your album in the car on his way to work. And "Since U Been Gone" is, weirdly enough, the rock single of the year so far -- Ted Leo covered it, and I've heard others compare it to something by Interpol.

You recently told Entertainment Weekly that it was your idea to make "Gone" so rocking, against the wishes of your record label. But is that really you? I mean, the video shows you in this heavy eyeliner and cleavage-revealing top, alternated with scenes where you're smashing up the apartment of the girl cheating with your boyfriend, screaming, "I get what I want!"

I don't know. That bratty sentiment and attempt to be a sexy rock star, no matter how addicting, just doesn't jibe with what you do best. It's not your fault either: The powers that be seem to want you to be everything to everybody -- an R&B diva, gay disco artist, badass rocker chick, wholesome Disney-movie singer, country crooner. Everything, that is, but yourself.

Look, you were clearly the most talented contestant on American Idol. And you were also the most genuine. Your real appeal was -- and still is -- your voice and your down-to-earth demeanor. You weren't trying to be anyone other than yourself, because you didn't need any flashy gimmicks or hair dye to earn attention. Those high notes you hit? Singing like that is usually only heard through the magic of ProTools -- or on Mariah Carey's first few albums.

And you still don't need anything more than your talent to gain attention. You're not a striking Cover Girl beauty, yet you make no apology for what you are, nor do you try to hide your roots. You're the girl next door; you get by with personality and quirky charm -- not by baring your belly or trying to be Pat Benatar.

In fact, you're the idol for every little girl who doesn't have the money to buy designer duds or the looks to be a waifish supermodel. I totally want to hang out with you after your show and go to IHOP and giggle about cute customers over fattening food -- you're that accessible. You're a throwback to the time when American idols became famous for their talent -- there's a reason you played Brenda Lee on that episode of American Dreams. You show girls that they don't have to be tanorexic and full of silicone to be beautiful and successful.

Of course, you're free to scream about that asshole who broke your heart -- you're human, after all. But why are you hiding your strongest assets under imitations of other people? Kelly, you do yourself a disservice when you forget that your distinctive talent is what makes you special -- not being a karaoke imitator of whatever style some hot producer or radio programmer thinks will be successful. It makes you look silly when you try to squeeze yourself into roles you appear ill suited to assume.

I'm so glad you just dumped your manager, Simon Fuller. You need to find someone who will let you crack open your diary and write the songs that suit your voice and your own unique style. Take some time after this tour, head back to Texas, and try to remember the Kelly Clarkson who had big dreams but not the means to reach them. I'll certainly be eager to hear about her.