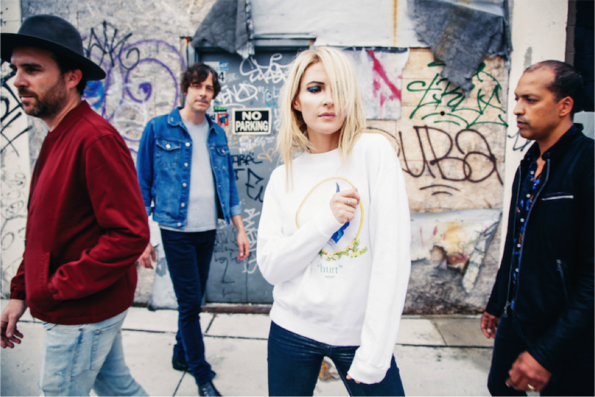 The band kicks off a 27-date winter tour on Monday when it performs at House of Blues. Shaw couldn’t be happier about returning to the clubs (and playing Cleveland, where the group hasn’t played in a few years) in support of last year’s Art of Doubt.

“It’s a very cool thing to be offered [to open for the Smashing Pumpkins,” he says in a recent phone interview. “We felt super honored that we got to be part of something that doesn’t happen very often. They’re a seminal band, and the fact that [Smashing Pumpkins singer-guitarist] Billy [Corgan] was a fan and wanted to bring us on the tour was great. But then, you have to go play 40 shows all summer, and you have to play at 7 p.m. You’re done by 8 and drunk by 9 and you spent every dollar you made on the tour on dinners by 11. It has its benefits and it has its drawbacks.”

The band got its start in Toronto in 1998 and now considers the city to be its home base, but the group initially had to leave the city to get noticed.

“We just wanted to move to a different city and experience other things,” Shaw explains. “It’s not that I didn’t have faith in Toronto. I just didn’t want to do it here. I wanted to go to America.”

The band went to New York and L.A. It even relocated to London at one point. It wasn’t until about 2004 or 2005 that the band came back to Canada.

“We’re a cross border, somewhat-off-on-our-own little band,” says Shaw. “We’ve always done our own thing and been a little bit insular about it. That’s because our roots are in lots of places with lots of different people.

“His name had been tossed around for a long time but not because we knew him,” says Shaw. “There was no personal connection whatsoever. I just knew who he was and what he had done. There was something about his production style that I really dug. I didn’t even know how he approached records. I just liked the sound of his records.”

The band sent him some demos and had a meeting. They “fully hit it off.” It helped that Meldal-Johnson had seen the band play a few shows in Los Angeles in the early 2000s and had what Shaw calls a “musical context” for the band’s music.

“There’s definitely more loud guitars than there have been on many records,” Shaw says when asked about the band’s approach on the disc. “Then, we started losing that sound of hard guitars, and that’s one of the reasons we wanted to get a producer. We noticed this pattern. When I was producing records, we would get to the mix room and there would be no guitars there because I spent my energy mixing the track and not playing guitars. One of the things that had to happen was that I needed to focus on being a guitar player.”

Album opener “Dark Saturday” features driving guitar and sultry vocals as Haines sings, “So dark/it ain’t so dark” over and over. The song emerged after Haines and Shaw had one of their famous blowouts in the studio.

“After the blowout and the repair and the hose down had happened, I was sitting in the corner of the room being generally irritated, and I started playing that opening guitar riff,” says Shaw. “Joules [Scott-Key] said, ‘That’s good.’ Josh [Winstead] said, ‘That’s good.’ I said, ‘Fuck you both.’ They said, “Keep going.” It channeled that energy and two hours later we had the track.”

“Die Happy” features a great vocal performance as Haines sings falsetto and sounds a bit like Debbie Harry in the process.

“That was one of the early ones for us,” says Shaw. “It went through a lot of different incarnations. We made Joules play this off-kilter beat with the tom on the wrong beat, and we just got out of there. Months later, we pulled out the hard drive and none of us remembered it at all. We had to write a whole new tune around it, and we did. All of a sudden, it all just came together. I feel like it has some sort of quintessential. Some songs are on the arms, and some are on the body. I feel like that one is on the body.”

Shaw says that at this point in its career, the band makes albums to “expand the show." He adds the upcoming tour will offer a retrospective of the band’s catalog as much as an opportunity to showcase songs from the latest album.

“On record seven, I don’t like the idea that you make a record and play 90 percent of the record,” he says. “I never enjoyed those type of shows. When I go see a band that has had a 20-year career, I wouldn’t be there because I only like the new album. When we’re writing an album, we’re always thinking about what it’ll be like in the Metric set. We got back from Europe in the fall, and the show feels like this huge retrospective, and it’s everything Metric has been or done. It’s really cool. It’s a time trip. It’s like seeing a picture of yourself in the future and in the past.”