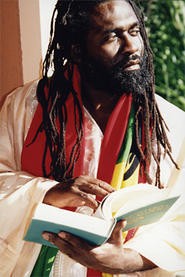 From hosting Jamaica's first reggae radio program to producing artists as varied as Sugar Minott and the Clash, the multitalented Mikey Dread has crossed countless boundaries over his 30-year career. Of his many accomplishments, perhaps the most significant (yet overlooked) is his development of the "singjay" style. As a singer, Dread realized the limitations of his raspy voice, and his half-chanted nursery-rhyme delivery became the benchmark for '80s dancehall.

Fun is an understatement for Dread's early albums. His 1978 debut, Dread at the Controls/ Evolutionary Rockers, was a tour de force that included bizarre jingles Dread created for his radio program, while his latest, Rasta in Control from 2002, is almost somber in comparison. Strong reflective numbers such as "Great God of Glory" and "Sacrifice" rightfully portray Mikey Dread as the well-deserving elder statesman of roots reggae.