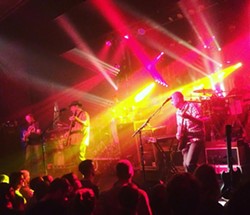 For a good long while, moe. has been a guaranteed thrill ride anytime they come to town. Earlier this week, the band posted up at Kent Stage — where they last played in late 2014 — and delivered another party for the mostly packed house.

In fact, there were a lot of similarities between the Sept. 28 setlist (see below) and that last show two years ago. The centerpiece jams of the second set — "Moth" (and the return to "Moth") and "Don't Fuck with Flo" — echoed the hallmarks of that previous show. This time around, the "Flo" jam was a deeply funky affair, with bassist Rob Derhak holding down a danceable slap groove while guitarists Chuck Garvey and Al Schnier each offered up soaring and dynamic solos. (The Garvey solo was my pick for best moment of the night.)

The first set also delivered the goods, with "Downward Facing Dog" weaving in and out of a handful of tunes, including Pink Floyd's "Fearless." Really great stuff, and "Rise" is just a pitch-perfect opener.

moe. is having a great year right now — Halloween and NYE loom — and, by all accounts, it seems as though they're poised for another good one in 2017. Kent State reunion? We hope so.