Mojo Nixon & the Toadliquors, with Lords of the Highway

Wednesday, June 28, at the Grog Shop 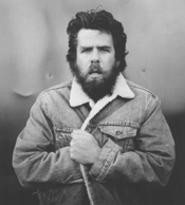 Mojo Nixon
An old political button adorned with that notorious other Nixon's mug once read: "Nixon -- Now more than ever." It only stands to reason that, in a presidential election year, which also happens to mark a millennium (the new one for some, the end of one for purists) and brings us a new Don Henley solo release, good old Mojo Nixon would pop up again. Always the comic pop-culture provocateur, Nixon is back (does he ever really go away?) on tour in support of last year's The Real Sock Ray Blues, an album that has Nixon continuing to hit obvious if not always familiar targets. Ray Blues is filled with humor-laced blasts at Disney (the subtly titled "Disney Is the Enemy"), O.J. Simpson ("Orenthal James [Was a Mighty Bad Man]"), Princess Di ("Drunk Divorced Floozie"), and even Nixon himself ("When Did I Become My Dad?").

The sound is typical rockahillbilly hell, and it's all delivered in classic Nixon fashion: tongue in and out of cheek, every minute bluesy and boozy. Nixon has managed to wrangle a career from such fare, going all the way back to 1985's Mojo Nixon and Skid Roper. Always clever, often flat-out brilliant and hilarious, Nixon's songs are known, by title at least, to nearly any music fan worth his doublewide. From "Stuffin' Martha's Muffin" (an ode to pioneer MTV VJ Martha Quinn) to "Elvis Is Everywhere," Nixon has left his personal pop-culture scar. Fifteen years into his enigmatic career, it would be easy to toss Nixon onto the slag heap of quirky music history and mark him as another fleeting "retro"-ist. But the Nixon catalog has legs. At his very best, Nixon was one of the late '80s'/early '90s' finest social critics and satirists. He conquered subjects ranging from S&L scandals to fatherhood, corporate takeovers, the minimum wage, pop celebrity, and on-the-job drug testing -- all with whip-smart acumen. But Nixon's finest moments have often been the ones that slipped by all but avid listeners -- little gems tucked away on records here and there. Like all fine sociopolitical commentators, those moments will always stand the test of time. And hey, Nixon was the first one to sing "Don Henley Must Die" -- a sentiment that's appropriate now more than ever.