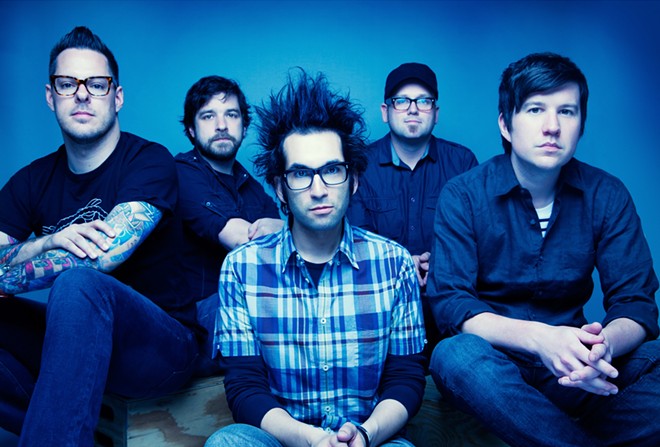 Epitaph Records
Motion City Soundtrack.
When Motion City Soundtrack singer-guitarist Justin Pierre first met guitarist Josh Cain, the two were in high school and liked very different types of music. Cain had an older brother who was the conduit for “really cool music” and introduced him to acts such as Big Black and the Pixies. Pierre had much more conventional inclinations.

“I was listening to whatever my parents listened to and then went to pop music,” says Pierre via phone from his Minneapolis home where he had just returned from a friend’s recording studio where he was “finishing up a few things.” Motion City Soundtrack brings its tour celebrating the 17th anniversary of Commit This to Memory to House of Blues on June 15. "I listened to whatever was on the radio and then saw my way to hip-hop. I was into the Beastie Boys. My dad got me Licensed to Ill, and it was them and Run DMC and the Fat Boys. I liked a Public Enemy song or two. Then, I got into metal. This is all in the course of two or three years. Eventually, I had a friend in high school who introduced me to Sonic Youth, Pixies, Nirvana and Smashing Pumpkins.”

Motion City Soundtrack distills those various influences on 2005's Commit This to Memory, a terrific pop-punk album that brought the band into the mainstream thanks to the jittery emo-pop single "Everything Is Alright," a song with a nervous energy that references a need for "self-medication" (Pierre reportedly struggled with depression, anxiety and substance abuse at the time). The album represented a big improvement from the band’s 2002 debut, I Am the Movie.

“[I Am the Movie] to me is an amalgamation of trying out different things,” says Pierre. “What happened for [Commit This to Memory] was getting [bassist] Matt [Taylor] and [drummer] Tony [Thaxton] and [keyboardist] Jesse [Johnson] together and writing as a full team instead of Josh and I with many different bass players and drummers. It was the five of us writing the record as a whole. In a way, that is both our sophomore album and our freshman album.”

Notably, the group hooked up with Blink-182’s Mark Hoppus, who produced the effort. Motion City Soundtrack had toured with Blink-182 prior to making the album, and Cain casually approached Hoppus after he realized that Hoppus had the same musical inspirations. Cain simply asked Hoppus if he wanted to “produce something,” and Hoppus agreed.

“What makes [Hoppus] super special is that he knows how to bring out whatever it is that the band does that makes them special,” says Pierre. “He didn’t tinker too much with the songwriting. The dude is like super smart. I don’t know if people know about him. He can walk into a room and pick up on what note is flat. He’s crazy smart. From a technical aspect, he can get the sounds he wants. He’s really good at the juxtaposition of elements. He said we sing too much. He told us to let the songs breathe every once in a while.”

“I don’t know 100 percent what we'll play, but my guess is we’ll play the album front to back, and then play another free-for-all set, almost like two sets,” says Pierre, who adds that the band will only have “a day or two to rehearse” prior to hitting the road in early January.

While he says it would be fun to pull out some deep cuts from the era, he also realizes that not everyone would want to hear the band's greatest misses.

"It’s kind of tough," he says. "There’s these guys in the Philly and Jersey area who always request one of our oldest songs, ‘Throw Down.’ We’ve played it a couple of times, and it’s like five people in the audience who are very excited, and the rest of the people are very confused. It’s like, ‘How much do you do the weird deep cuts for the super nerds?’ As a super nerd myself, I do appreciate playing those songs now and then. But honestly, at my age, I stopped caring about things that don’t matter. [With this tour,] I just want to bring some joy into the world where I can. That’s about it.”