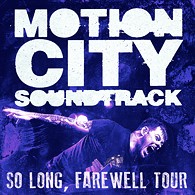 After an 18-year, six-album career, pop-punk rockers Motion City Soundtrack have announced plans for a farewell tour. The first leg will begin on May 5 in Portland, Oregon and end on May 22 in Des Moines. The second leg will kick off on June 2 in Omaha and end in the band’s hometown of Minneapolis. That leg includes a stop at House of Blues on June 20.

The band released the following statement announcing the tour: “It has been a quiet winter for us. We’ve had some time at home after a very busy 2015. With this time, we've been able to think about the past, present, and future of Motion City Soundtrack. All of this thinking has lead to several conversations, and these conversations have lead us to a very bittersweet realization: We have no idea what the future holds, but for now we are done. Needless to say, we’re feeling all the feels — you may be as well. If so, or if you’ve ever been touched by our music, we ask you to come out and sing along with us one last time in 2016.”

Light Years and Have Mercy will open the show. Tickets go on sale at 10 a.m. on Friday.