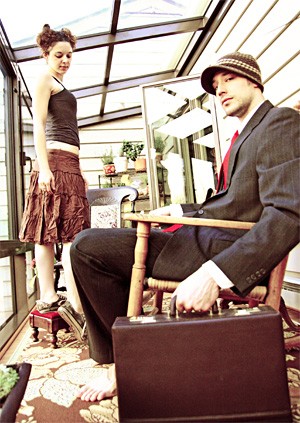 Mr. Gnome spent the past year turning people on all over the country — even if a lot of those people weren't always sure what they were listening to. An early review pegged the Cleveland duo as a hybrid of Portishead and Black Sabbath, which gets pretty close to nailing the full-frontal assault of the group's rough-rider riffing and skittering trip-hop beats.

Adds the tiny singer, "But he was really graphic."

"That part was pretty scary," says Meister. "But we meet a lot of nice people too."

Last year, they met more nice people than ever. After two years and two EPs, the duo bought a gold minivan in late 2006. In 2007, they put 70,000 miles on it, surviving wildfires, break-ins, and surprisingly few lovers' quarrels. Barille and Meister have been dating since high school, when they formed the group. Some of their chemistry is captured on the Echoes on the Ground and Mr. Gnome EPs, which roll from go-go rawk ("Drunky Stoney") to psychedelic tidal waves ("Truffle Shuffle").

Mr. Gnome's big, sensual sound can be traced back to when Barille and Meister first played together in Draw Down the Moon, a beer-league project led by Meister's dad. A rotating group of musicians performed Mr. Meister's songs in the family basement. At the time, Sam played guitar on his dad's tunes, which he describes as "slowcore, sad-boy music." When the bandleader would go upstairs, Sam would get behind the drums and bash away while Barille sang, shredded, and jammed.

"It felt more natural," recalls Meister. "And it allowed us to grow into what ended up being Mr. Gnome. We broke my dad's heart — broke it, pulled it out of his chest, and stomped on it."

We're guessing that not much heart-stomping goes on within the band these days. Unlike Mr. Gnome's alternately spacey and manic music, Barille and Meister are effervescent and social. They finish each other's stories without stepping on their respective lines. And they cheerfully make a fist and tap hands when one sets the other up for a zinger of a punch line. For a long-running twosome, they act like they're still exploring a budding new romance.

"I don't think we're a normal couple by any means," says Barille. "We have so much in common, it's weird. We like all the same things. We just get along."

"I don't think I could do this in any other situation," adds Meister. "I couldn't be in a band with four men. I would be the guy who breaks the band up. You can't tell people, 'You're pissing me off!' But we can do that, and it works."

Early on, they tried out a bass player. But he didn't really contribute much to the sound or process. "It's hard to let people in to what we're doing," says Barille. "Looking back, none of our music would be the same if we'd had other people."

"The approach of what we're doing is different than other bands," explains Meister. "Because we're limited, we're compensating for it."

"The writing is different when you're two people," continues Barille. "Because you're not leaning on other people to fill in the spots."

"That's how we started doing the soft-loud thing," says Meister. "We had the drums loud and dirty, and the vocals clean and soft."

The music's basic setup contrasts, like the musicians who play it. Standing 5 feet 6 inches, the singer is way smaller than her voice. At 6 feet 6 inches, the drummer developed his fast-twitch coordination as a scholarship-snagging point guard. No formal lessons went into either Meister's scattershot percussion attack or Barille's warm, resonant voice.

It's a big sound on record, and — after some trial and error — it's just as big onstage. At first, Barille played through a Fender Twin amplifier, summoning reverb with a distortion pedal. Now she strums through a Mesa Boogie amp, with one channel for clean sound and one for distortion. Some fans even think Barille and Meister are playing along to backing tracks in concert.

On its full-length debut, Deliver This Creature, Mr. Gnome sounds bigger and wider than ever, finding harmony in volcanic gush ("After the Sun") and celestial hush ("Rabbit"). Barille and Meister decorate their wall of noise with gentle acoustic guitar, piano, and even a lyrical trumpet melody in the closing "Tied."

They recorded most of album on the road last year, coasting on savings and ticket money. Some of those "nice people" they met along the way happened to be big names in the music business.

Deliver This Creature was recorded with engineer Kendra Lynn at Portland, Oregon's Jackpot! Studios, which has hosted sessions by Elliott Smith and the Shins. Additional tracks were cut with Chris Schultz at Tucson's Wavelab Studios, where Neko Case and Animal Collective have recorded. The album was finished at Cleveland's Ante Up Audio with Michael Seifert, who recently worked with Fountains of Wayne and Colbie Caillat. The CD was mixed at Wisconsin's Smart Studios (which is owned by Nirvana producer and Garbage member Butch Vig) by Beau Sorenson, who's worked with Tegan & Sara and Death Cab for Cutie.

With all those big names behind it, Deliver This Creature certainly sounds like a big indie-label record. But Barille and Meister produced it and released it on their own El Marko label. "I never had plans on doing anything like this," says Meister. "It's just happened. It's been very exciting. It's a lifestyle right now. The idea for us is to be able to keep doing it. And if that happens, we're successful."