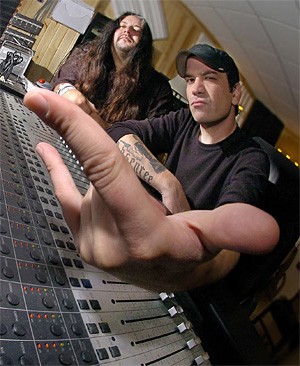 Walter Novak
The Forecast calls for a gigantic index finger.

After 11 years on the road with Mushroomhead, Jason Popson — who was known as "J. Mann" back then — made some friends in metal places. He split from Cleveland's reigning rock kings in 2004, and his new group, Pitch Black Forecast, marks a return to the spotlight. And he's backed by A-list guests from all over the metal world.

"I always wanted a record of everything I liked about metal," says Popson, settled on a black leather sofa at Bedford's Galahad Studios, where he's a minority partner. "I grew up listening to metal and even death metal. But I never dug the cartoony evil and the blood and horror of the genre. I wanted to make music that sounded like that, but had something to say — something more human. What I liked about hardcore was that it was something people could relate to."

Pitch Black Forecast's debut album, Absentee, delivers the sound and the substance he was looking for — with unrelenting athletic drumming by percussion legend Gene Hoglan and appearances by Lamb of God singer Randy Blythe and Ringworm vocalist the Human Furnace. Popson's first post-Mushroomhead metal project had humble beginnings: In 2004, 'Head was riding high, touring the country to promote a major-label record. During downtime, Popson went on the road with pals Meshuggah, the kings of Swedish tech-metal. But he wasn't singing or playing; he was selling their merch.

Tipping his Bud Light, Popson recalls the guys in Mushroomhead laughing at him. "They said, 'What are you doing selling T-shirts? We sell more records than those guys.' But it made me the connections for the first release on my [Fractured Transmitter] label — the Meshuggah EP [2004's I]. And for my new band."

Strapping Young Lad, a highly regarded traditional metal group, was also on that tour. Its drummer, Hoglan, is a pioneer of the genre's pneumatic double-bass rolls. He's played with Dark Angel, Testament, cartoon-metal kings Dethklok, and dozens of others over the years. For weeks, Hoglan knew Popson as simply J the T-Shirt Dude.

"He was just a cool guy," recalls Hoglan. "He never brought up [his band] once. And one of my dudes brought it up, like, 'That guy's in Mushroomhead.' Like, no shit? Later, [Popson] said, 'I'd like to get you to do a song or two on this project.' And I always wanted to do it, because I dug J."

Over the years, quite a few other people found they dug Popson too. Pitch Black Forecast was originally conceived as an all-star project like Dave Grohl's Probot: With Popson singing, a different guitarist would play on each track. Axemen in top underground groups like Dillinger Escape Plan, Agoraphobic Nosebleed, Hatebreed, and Obituary committed. But when Popson was all set to record, his buds were busy making their own albums. All except Hoglan. The original project was dead, but a new band was born.

Hoglan came to Cleveland in January 2007. When he arrived, Popson had no songs ready. By the time the drummer left 10 days later, they had recorded an entire album. Under the pressure to create something from nothing, the two didn't get much done at first. Hoglan spent time sitting on a sofa, writing riffs. So engineer Bill Korecky brought in former NDE guitarist Robert Reinard, who got a crash course in Advanced Metal. "I'd give him homework," says Popson, between drags of a Marlboro. "I'd say, 'Go write a song that sounds like Carcass meets Hatebreed.' And he would."

Those cram sessions yielded Absentee, a survey of various metal styles, with Hoglan's intricate, ambidextrous, and rapid-fire play at its heart. "Atonement" nods to riff-based thrash classics; "Ornament" is a mosh-pit call to arms. One of Popson's favorite tracks is "Lighthouse," a late addition to the record, featuring lyrics that were already tattooed on his left forearm in script: "We need a lighthouse for the lost/And a beacon for the broken."

"I put the United States of America on trial," says Popson of the song. "The way we treat kids, too much reality TV, what is condoned and promoted. 'We've got to stand up/We've got to fight back/We've got to man up/And say fuck that.' That's some shit you can salute to."

The album's unifying theme comes down to frustration. Popson's grandfather died shortly before he quit Mushroomhead. His dad passed soon after that. Then many friendships fell apart. Absentee is the singer's first chance to let off four years of steam.

But for the time being, Popson faces the tough business of getting people interested in Absentee. He's heavily invested in the album, having spent his remaining Mushroomhead savings on studio time, packaging, ads, a publicist, and airfare and hotels for Hoglan and bassist Craig Martini. The elaborate CD insert includes a foldout poster, featuring artwork by top-ranked illustrators Derek Hess and Stephen Kasner.

Whether Absentee sells or not, Popson is happy he made the record he always wanted to hear. And you can bet he's not talking about just money when he says, "Everything I've got is in this record."