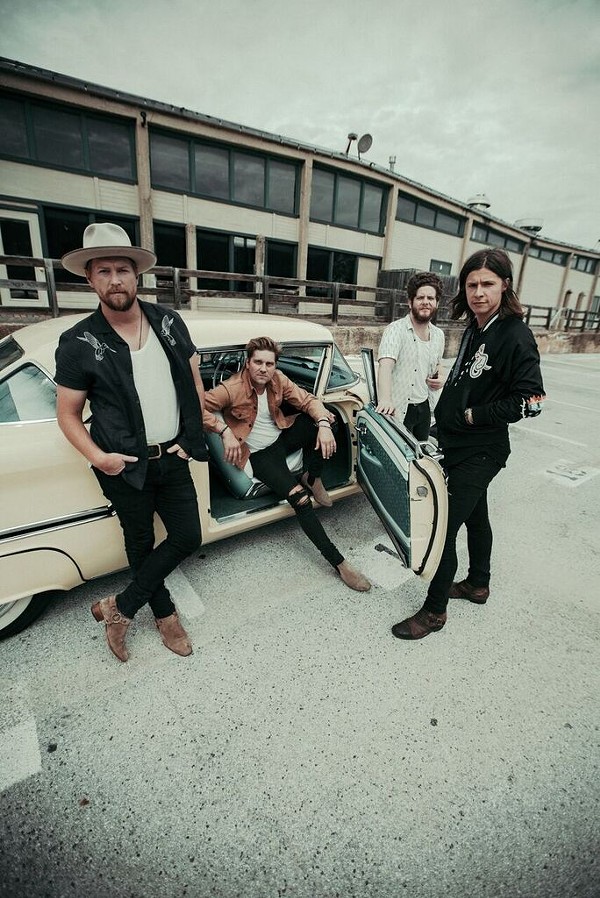 Nolan Feldpausch
Singer-guitarist Bear Rinehart and singer-guitarist Bo Rinehart were initially a coffeehouse folk act, but they expanded to a four-piece after adding singer-bassist Seth Bolt and singer-keyboardist Josh Lovelace to the fold about 15 years ago. They've steadily toured and recorded as NEEDTOBREATHE ever since.

The tour that brings the group to Jacobs Pavilion at Nautica on Wednesday, Sept. 5, supports a new EP, Forever on Your Side. The group retreated to a mountain cabin in Cashiers, North Carolina, to write the songs that appear on the release.

“We go to mountain houses and lock ourselves away for a couple of weeks to write records,” says Bear Rinehart. “That’s when these songs started. They felt like ones we could track right then. We had ten days, which wasn’t enough time to make an album. We wanted to go somewhere that we weren’t comfortable just to see what would happen.”

The guys wrote seven songs in ten days. Because they didn’t want to wait until they had enough songs for a full-length album, they rushed over to Niles City Sound Studio in Forth Worth, TX, to record them and release the four that appear on Forever on Your Side.

“The process was amazing,” says Rinehart when asked about recording at the studio. “The songs are really timely, and we’re really proud of them. We got it done and didn’t want to wait a year to put them out. We like the producers there. They had done a record for Leon [Bridges] that we love, and we wanted this early ‘60s soul Isaac Hayes type of thing. They had done a lot of old school direct-to-tape recordings, so it worked out great.”

The somber “Bridges Burn,” a tune that features particularly soulful vocals, starts the album off.

“The band has been through a lot, and a lot of the songs come out of that place,” he says. “We write them in a therapeutic way. We don’t realize what they’re about until it’s down on paper. 'Bridges Burn' is like that. we’ve gone through tough times and it feels like we’re moving into a great time as a band and we’re comfortable with who we are.”

The equally somber “Darling” sounds like it could be a hymn you’d hear at church as the song’s intro features nothing more than vocals and a bit of organ and acoustic guitar.

“It’s a road song,” Rinehart explains. “We’ve been playing it on this tour. I’m always saying, ‘Don’t feel sorry for us. We have the best job in the world, and we love it.’ But when you’re on the road as long we’ve been for 15 years, there are some lonely times. That’s what the song is about. The response has been good. I have military people who have to be away tell me, 'This is exactly how we feel.’”

The rollicking, Black Keys-like “Bullets” comes across really well with its cooing back vocals, driving guitars and trippy musical bridge.

“It was one of those mountain house songs,” says Rinehart when asked about the track. “Bo had had that lyric for a long time. It started as a guitar riff over coffee at 8 a.m. We wanted to run with it, and Bo came up with the lyrics. It’s one of the faster songs we have written. It’s not about gun violence. It pertains to the situation, but it’s more of a metaphor about the things people say and do than a literal translation.”

The band team up with fellow roots rocks Johnnyswim on the banjo-driven anthem “Forever on Your Side.” Since Johnnyswim is also touring with the band, the two groups will perform the track together.

“They come out and sing it along with us, and they’re great,” says Rinehart. “People have said it could have fit on any record of ours. We’ve gone a lot of different directions over the years, but it’s got that rootsy Springsteen thing that’s been our wheelhouse. It’s about us coming to grips with who we are.”

“We can write about lots of things, but our fans connect to are the inspiring things,” he says. “I always think people should leave the show and want to be the best husband or wife or sibling or employee that they can be. We felt that way when we went to shows as kids. I remember leaving shows and thinking I’m going to get a guitar tomorrow. It’s cool to have songs that people can live their life to and have songs that people can go to when they’re in trouble. This is the biggest show we’ve ever done in terms of production. We’re doing some acoustic songs. It’s high energy rock but has some of the emotional inspiration in it too. It’s a lot of fun. It’s the longest how we’ve ever played. So far, it’s had the best results.”