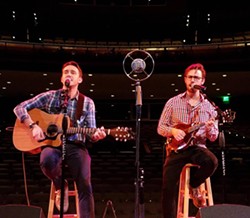 Courtesy of Honeybucket
Given their musically eclectic backgrounds, the guys in the local band Honeybucket prefer to think of their music as "new grass" rather than traditional bluegrass.

"All three of us have more of a pop rock background," singer-guitarist Adam Reifsnyder once told us. "I think we write these more poppy bluegrass traditional rock songs and put this spin on it."

Now, the band has just released a new single, "Bad Thoughts," that shows off another side of its sound. The song is available on Spotify and iTunes.

"The song is a dark, intimate departure from our previous outings," says Reifsnyder, adding that the band wanted a Simon & Garfunkel-meets-Nashville vibe for the track. "This marks a step in a new direction for the band in terms of recording: we've added drums and electric guitar for a much fuller sound."

The new single marks the group's first release since 2015's Stompin' Grounds, the album that included an inventive rendition of the Kid Cudi track "Pursuit of Happiness."