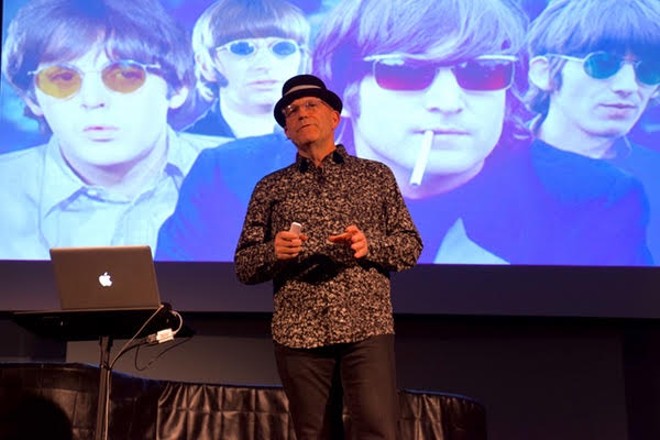 Courtesy of Thomas Mulready
A couple of years back, local Bowiephile Thomas Mulready began hosting "An Evening With(out) David Bowie," an in-depth presentation featuring rare video clips, "needle drops," obscure cuts and recently surfaced details regarding the Thin White Duke. The show offers "a multitude of factoids and little-known background informed by a framework of themes the artist mined at every stage of his career, right up to his untimely passing and beyond."

Now, Mulready has turned his attention to the Beatles albums Revolver and The White Album.

On Sept. 21 at the Bop Stop, he’ll present “Relax and Float Upstream: Behind the Beatles’ masterpiece Revolver.” He’ll talk about how Revolver was recorded at a pivotal time for the group, which had just performed at Shea Stadium and had yet to record Sgt. Pepper’s Lonely Hearts Club Band. He’ll divide the program into two segments with separate admission prices. The first will focus on Side A, and the second will focus on Side B. The lectures start at 8 and 9:30 p.m., respectively. Tickets are $25.

On Sept. 22 in a program dubbed “(secrets of the white album)," he’ll talk about The White Album and explain why the Beatles embraced transcendental meditation and renounced their use of drugs. He’ll discuss Album 1 at 8 p.m. and Album 2 at 9:30 p.m. Tickets are $15, or $25 for both shows.

The shows will feature rare video and photos, and there will be Q&A sessions too.