A book chronicling obscure LPs documents the thrill of being a music geek. 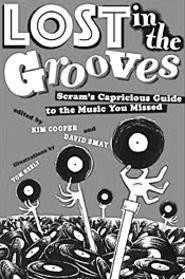 Miss out on voodoo shrieker Exuma or Esquerita, the piano-pummeling eccentric, the first time around? Lost in the Grooves will help you catch up.
Serious music dweebs will find Lost in the Grooves: Scram's Capricious Guide to the Music You Missed to be their vinyl-collecting bible. Those guaranteed to spazz out include the lisping, indie-rock obsessive who gets teary-eyed at Belle & Sebastian concerts, the Steve Buscemi character in the movie Ghost World, and the droning, Kermit the Frog-voiced fellow who knows the whole discography of bands that he doesn't even like. It's a guidebook written by geeks for geeks that makes rock and roll seem almost uncool, as if it could be grouped alongside comic books or Star Trek or other objects of fascination to cliques of nerdy fans.

That said, the average music enthusiast will also find Lost in the Grooves to be an informative and pleasurable read. It will undoubtedly inspire readers to seek out music they'd otherwise never consider. The book, which is edited by Scram editor Kim Cooper and Scram contributor David Smay (also the authors of Bubblegum Music Is the Naked Truth: The Dark History of Prepubescent Pop From the Banana Splits to Britney Spears), includes a wealth of far-out performers who never got their due, forgotten albums by big-time artists, and impassioned defenses of maligned records that the Salvation Army can't get rid of.

The emphasis here is on vinyl, including many records that have yet to be rediscovered on CD. Among the book's contributors are Radio Birdman guitarist Deniz Tek, Angry Samoan Metal Mike Saunders, old-school rock critic Richard Meltzer, Bomp Records honcho Greg Shaw, producer Jim O'Rourke, filmmaker Sean Carrillo, and a swap-meet-sized gang of freelance critics and music 'zine wackadoos.

Lost in the Grooves doesn't have much to say about jazz or metal, and the few hip-hop writeups appear to be from folks who are hardly hip-hop fanatics. Otherwise, most musical genres are well covered, with prominence given to the geekiest artists and albums that are the most difficult to find. Some of the contributors are more serious vinyl aficionados than essayists, though many of them do succeed in promoting their favorite obscurities, making the reader wonder, "Should I really seek out a copy of Buckner & Garcia's Pac-Man Fever or the Bee Gees' Mr. Natural?" "Yes, you must," scream these writers.

Kim Cooper tells the engaging story of the short and very obscure musical career of Linda Perhacs, a Beverly Hills dental assistant and tripped-out songwriter, whose creative efforts didn't bloom until she fell in with the laid-back L.A hippie crowd. One of her patients was film composer Leonard Rosenman, who in 1970 helped Perhacs record her only album, Parallelograms, which Cooper describes as "delicately layered love poems to the natural world and the charged erotics of youth."

Also forgotten in music history is Esquerita, a piano-pummeling eccentric from New Orleans, who according to rockabilly singer Deke Dickerson was the source for Little Richard's madcap shtick. Dickerson writes that Esquerita is "generally acknowledged as the source for the bizarre/flamboyantly gay/mega-talented/hollerin'/screamin'/rhythm and blues archetype that Little Richard would take to the bank alone." Though signed to Capitol, which released his self-titled debut in 1958, Esquerita was too much for the general music-buying public of the time, and original copies of the album are extremely difficult to find.

Epidemiologist and former radio DJ Max Hechter writes about blue-collar punks Cock Sparrer, a band that might have been a contender, but whose career went south quickly. Formed in 1974, Cock Sparrer almost hooked up with Malcolm McLaren, but the deal didn't work out -- reportedly, because he failed to buy the band a round of drinks. McLaren went on to manage the Sex Pistols, while Cock Sparrer's catchy self-titled debut was released only in Spain, after their label, Decca, went bankrupt.

David J. Schwartz focuses on a somewhat forgotten aspect of Johnny Cash's storied career. As a young ruffian, Cash wasn't afraid to piss people off. When country radio ignored the song "The Ballad of Ira Hayes," from his 1964 album Bitter Tears: Ballads of the American Indian, Cash took out a full-page ad in Billboard indicting the music industry for wishing to "wallow in meaninglessness." Schwartz explains how Cash took risks with this politically outraged concept album -- which never did get any radio airplay.

For hardcore record-collecting freaks who want to be turned on to music they've never heard of, Lost in the Grooves hails such little known acts as the voodoo shrieker Exuma, the Wichita rock quartet the Embarrassment, the Italian-wannabe Hawaiian act Nino Rejna and His Hawaiian Guitars, the Hoboken art-school band the Individuals, French ex-beatnik popster Michel Polnareff, the '60s singing duo Jackie Cain & Roy Kral, and the Barry Sisters, singers of Yiddish-American standards.

The book also champions traditional rock-critic favorites (of which the rest of the world is mostly oblivious), such as the Britpop outfit Housemartins; the always-written-about Mekons; the intelligent, hardworking Poster Children; Elephant 6 collective members Neutral Milk Hotel; Cleveland's Beatles-style Raspberries and avant-garde Pere Ubu; and snappy Seattle pop-punkers the Fastbacks. Bands perennially adored by rock critics, such as the Fall and Yo La Tengo, surprisingly don't make the cut.

With its esoteric trivia and boasts of record collectors, this guide is as enjoyable to peruse as it undoubtedly was to put together. Lost in the Grooves proves that it's fun to be an insane dork.