NOFX takes fans on wild ride at House of Blues

NOFX Performing at House of Blues 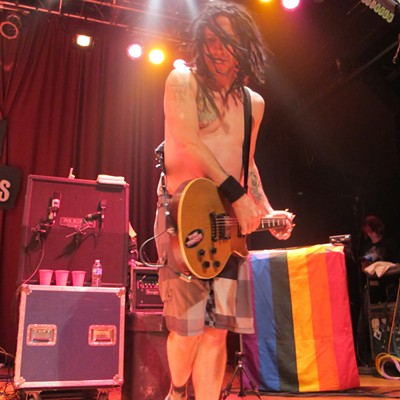 House of Blues has a strict policy against moshing and stage diving during concerts. Trying to enforce those rules at last night’s NOFX concert proved virtually impossible as rowdy fans regularly crowd-surfed throughout the entire 90-minute performance, effectively encouraging the band to amp up the between-song antics. Unfazed by the various things thrown on stage (shoes, hats, beer cups), singer-bassist Fat Mike kept the audience entertained throughout the set, showing just why he makes for such a great front man.

As Mike came on stage, he told audience members that there would be “no swearing” because his 9-year-old daughter was backstage. He quickly broke his own rules and throw up his middle finger just to show how little he cared for etiquette. Dressed in combat boots and cut off shorts and sporting a purple Mohawk, Mike was alternately light-hearted and mean-spirited. At the show’s best moments, he channeled that mean-spiritedness into tunes such as “We March to the Beat of Indifferent Drum” for which his snotty, high-pitched vocals were perfectly suited. At his worst, he berated a woman for bringing her 11-year-old child to the show. “Go to a Britney Spears show next time,” he said before letting a few expletives fly.

The show’s centerpiece was clearly “The Decline,” an epic tune about complacency and indifference that clocked in at close to 20 minutes. While the band lost the tune’s thread at times, it was an ambitious undertaking that came off pretty well, especially when you consider the rest of the songs in the set clocked in at two or three minutes in length. After more banter with the audience, the group played a somber rendition of “The Shortest Pier” for what Mike said was the very first time. NOFX’s cover of the tune appears on a new compilation that pays tribute to the song’s late author, No Use for a Name’s Tony Sly. The band’s performance showed a bit more nuance as it didn’t just try to rip through the song as fast and furiously as possible.

To start the encore, the band unveiled what it called a “special Cleveland banner” that featured the NOFX logo in the colors of the Cleveland Browns. Then, after Mike argued with drummer Erik Sandin about which song to play next, the group delivered a searing rendition of “Franco Un-American” that then segued into “Don’t Call Me White” and the set closing “Kill all the White Man,” which it delivered in all its dub reggae glory (horns included!).