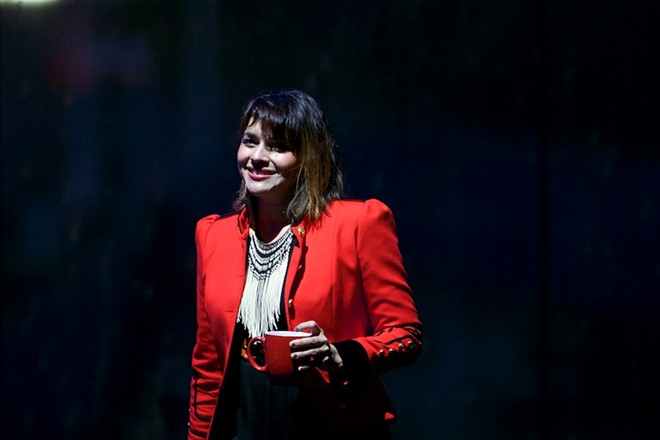 Scott Sandburg Photo
Norah Jones can do whatever she damn well wants. She could have been a country Western singer, a jazz pianist or jam band leader. And at last night's crowded Jacobs Pavilion at Nautica performance, she showed glimmers of all three.

Throughout the rainy and breezy evening, the singer-songwriter performed on a baby grand piano, keyboard and at least four guitars. Her effortlessly smokey vocals remained the same as she floated between instruments and genres seamlessly with her backing band. The wet weather and beautiful Cleveland skyline accompanied the mellow mood perfectly.

But she's known for her piano skills. Although it's been since 2002 when she released her breakout album, Come Away With Me, people still think of her as some sort of adult contemporary artist with a jazzy edge. But since that Grammy-winning album, she's experimented with as many musical styles possible.

Here's the thing about a Norah Jones performance: She's happy her fans, in last night's case mostly folks in their late-20s and up, have come to see her. She thanked us over and over. She even jokingly called out one person in the third row who had a pair of binoculars.

"Do I have anything in my teeth?" she asked.

But her prevailing presence suggested: "This is my music, listen, or don't." Especially when she was on the baby grand, which was situated sideways on the stage, she was almost into herself entirely. She isn't some big Elton John showman tickling the keys, or a sexy diva preening for love. However, once she moved to the frontfacing keyboard, and later took up the guitar, she seemed far more engaged with the audience.

Jones' cover of LCD Soundsystem's "American Dream" was one of the best songs of the night. She let go and went for the rafters, while playing on her keyboard. After that, the performance picked up momentum. She played some of the old standards such as "Sunrise" and "Don't Know Why." The sitting audience became even more audible.

"We love you Norah!" one fan screamed.

In the end, Jones sang the song most of us came for — "Come Away With Me." But this time she was on guitar, not piano. Showing once again, she can do whatever she wants.

A Note About Security: The venue, understandably, thanks to recent events at an Ariana grande concert, decided not to allow most bags inside. That meant most women were regaled to a coat check-esque line to give up their purses. Everyone was then wanded on the way through the gate. It took 30 minutes just to get into the show, and it was raining. The venue however, did a stellar job of returning bags at the end of the show. That process was quick and easy. For the foreseeable future, concertgoers should expect lines like this for many shows.