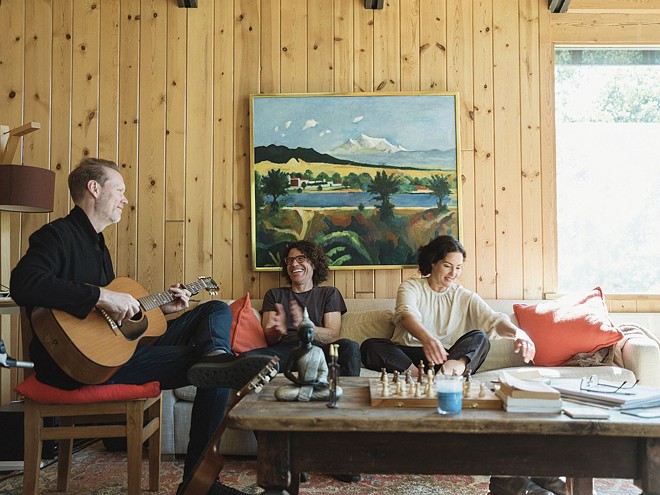 Stuart Bunton
The indie-pop act Renee & Jeremy.
Singer-songwriter Renee Stahl and singer-songwriter Jeremy Toback began collaborating in 2006 when Stahl, who was pregnant at the time, asked Toback if he wanted to contribute a song to a lullaby record. They cut some songs together, and the recordings became their debut release, 2007’s It’s a Big World.

Two years later they released C’mon, and their covers album A Little Love followed in 2012.

Their forthcoming album, Whole Lotta Love, promises to dive even deeper into their gift for intimate riffs on iconic songs. Due out June 11, it’s their first new album in eight long years. Despite the hiatus of sorts, Stahl says it wasn’t that they needed a break from each other.

“There was no reason we stopped [recording],” says Stahl in a recent phone interview from her Santa Barbara home. “We both had other projects going on at the time. It was nothing personal. It was just a timing thing.” We worked together on the two Renee and Friends a project Renee put together with a notable array of singers, including Molly Shannon, a fellow Clevelander whom she met at theater camp when they were younger.

The pandemic brought Stahl and Toback back together.

“We always wanted to do another cover record,” says Stahl, who adds that she and Toback found a way to safely record during the lock down. “Jeremy and I put together playlists to listen to and would text each other songs that we were thinking of doing. It almost took longer to find the songs than to record them. Many of the songs that looked good to us as first didn’t make the cut once we tried them.

Firmly ensconced in California, Stahl says she looks back fondly on her time in Northeast Ohio.

“I loved growing up in Cleveland, so much culture, nature and values centering around family. The arts are also greatly supported in Cleveland.”

While here, she was fed a steady diet of classic rock.

“I’ve recently been playing badminton with Rich Jacques, the producer of the record, who was born in Euclid,” she says. “When we play , we put on music that reminds of Cleveland. We put on Genesis, Styx ,Foreigner, etc I grew up listening to WMMS and G98. I grew up doing musical theater in Cleveland Heights. Jerry Leonard from Heights Youth Theatre was a big influence along with my high school music teacher, Mr. William D. Thomas. He was a bit tough with us, but it paid off. I was able to get the albums we made in our singing group Heights Singers and have been listening to them with my girls. Making this new album was such an intimate experience. We all came in open and ready."

The duo’s pensive version of Zeppelin’s “Whole Lotta Love” features guitar riffs that sound like they’d be more at home on a New Age album. Not that there’s anything wrong with that.

“That wasn’t our intention,” says Stahl. “Each [song] just happened. It was always a collaborative effort.

“The Zeppelin version is so blatantly sexual," says Toback in a separate interview. "I really doubted that it was possible to transform and make it into a sweet family friendly love song.”

Now, it’s one of his favorite songs on the record.

"Don’t Change" was less dramatic but is also an important song on the album.

"We love taking favorites from childhood and giving them a spin," says Toback. "A friend of mine suggested it to me and I brought it in early on in pre-production. I always loved the INXS original growing up but just wasn't sure if we could make it meaningful R&J style. But once we tried it, you could hear this romantic anthem become a quiet, moving call for kids of all ages to simply be themselves.

The duo originally planned on this only being an album of covers. When Jacques started playing a lovely little riff, it ended up as "Here and Now," the one original tune on the album.

The twosome filmed a music video for the ballad in the barren Salton Sea."

“I was a little nervous to go out there,” says Stahl. “I had seen a documentary on it some years back and didn’t know what to expect.. My first introduction was the smell of dead fish. It felt like you were at the end of the world. The shoot itself was kind of an epic journey for all of us. We had no crew… just the four of us in the hot desert in our Subarus… 'chasing magic,' as our director Ron Hamad would say."

Stahl says the process of making the album inspired the duo to the point that they’re already talking about the next release.

“Overall, this was a really lovely record to make,” she says. “I was sad when it the recording was over. It was an enjoyable experience.”