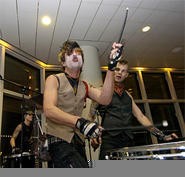 Walter Novak
Street Drum Corps, rocking the Rock Hall on January 26.
Musician and noted 'zine publisher Wred Fright makes his debut as a novelist with The Pornographic Flabbergasted Emus, a comedic new book based on his adventures playing across northern Ohio in 20 indie-rock bands.

"So many rock and roll novels and movies have the stock plot of the band that gets big or almost gets big," says Fright, a Lakewood resident who was born Fred Wright. "I wanted to tell the far more common and realistic, yet seldom-told story of the band who never becomes close to becoming rock stars, but have fun nonetheless."

Fright went to school at Kent State and Bowling Green, which inspired the book's setting of a fictional Ohio college town. From a witch to a secretly married couple, the characters form a de facto family in a band house, where they endure eccentric roommates, scrounge for money, and make it from one night to another. Toward the end, the Emus mount a tour and visit Cleveland, playing a club based on the defunct DIY venue Speak in Tongues. Through the book, Fright makes references to local bands including Dink and Gil Mantera's Party Dream.

"I was trying to distill rock and roll archetypes based on real people I knew," says Fright. "For example, I thought about all the bass players I knew, and I tried to combine them into one person. Anyone who's been around music scenes long enough will recognize the characters."

· Chimaira's killer new album, Resurrection, is set for March 6 release on Ferret. The disc will arrive in two forms: an inexpensive CD-only version and a two-disc set with a DVD that documents the making of the album.

· Rachel Roberts' full-band rock project has changed its name from Rachel Roberts and the Family to Rachel's Secret Stash. The group is slowly recording an album, and the singer-songwriter will continue playing lively folk as a solo artist. Catch the Stash in Akron on Saturday, April 3, at the Lime Spider (207 South Main Street) and Saturday, April 10, at Musica (17 Maiden Lane).

· The Rock and Roll Hall of Fame (One Key Plaza) will celebrate Black History Month with a series of reggae events, from a lecture by Island Records founder Chris Blackwell to a concert by the Mighty Diamonds and Dub Flex.