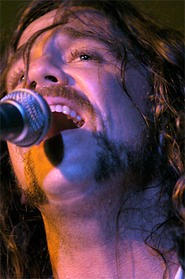 Walter Novak
Patrick Sweany at the Beachland.
After a protracted decline, nightlife on the northern edge of the once-legendary East Bank of the Flats will soon come to an end. The owners of the section's remaining night clubs have reached an agreement to sell their properties to developer Scott Wolstein, making way for a new neighborhood of housing and assorted businesses.

The party may continue a few blocks south, in a proposed adult-entertainment zone. Cleveland Mayor Frank Jackson has proposed centralizing the area's gentlemen's clubs into a space on the opposite end of the East Bank.

Larry Flynt's Hustler Club, part of the Hustler publisher's adult-entertainment empire, will move to the former location of the Old Crooked River Brewing Company, across the river from the Diamond Men's Club. The Flynt Club's spokesperson said the club will operate continuously, but could not provide an estimated timeline for the move.

Some say the zone could give the city a new calling card.

"It could possibly be a good thing," says Ed Thompson, manager of the Diamond club. "Out-of-towners and conventioneers could find it more easily, and it could be more convenient. But we and some of the neighbors have concerns about parking and infrastructure."

While traffic on the East Bank has dwindled, the West Bank's assorted bars and clubs have found a steady stream of patrons. West Bank club managers don't see the adult-zone plan swaying the area one way or the other.

"The strip clubs surround us anyway," says Gretchen Erb, manager of McCarthy's, neighbor of the Diamond Club and Christie's Cabaret. "It's just another club moving in. I think the only person it's good for is Wolstein."

* Lost State of Franklin -- those coed roots-revivalists led by former Infinite Number of Sounds singer J. Scott Franklin -- has returned from a whirlwind trip to France, where they were one of two American bands selected to play the Festival International de Musique Universitaire. Read a full account at www.loststateoffranklin.com.

* Helmet mainman Page Hamilton will speak and answer questions at the Rock Hall (1 Key Plaza) Wednesday, June 20 at 7 p.m. as part of the Hall's ongoing series, From Songwriters to Soundmen: The People Behind the Hits. The event is free with an invitation; call 216-515-8426.

* Live Nation and GetGo have partnered on a series of promotions, one of which lets concertgoers get early admission to House of Blues and Blossom. Visit www.getgoconcerts.com for more details.

* Visit www.clevescene.com/blogs for exclusive online content, from interviews to downloads.