O.A.R. Bottles the Joys of Summer in Cleveland, and for That We Thank Them 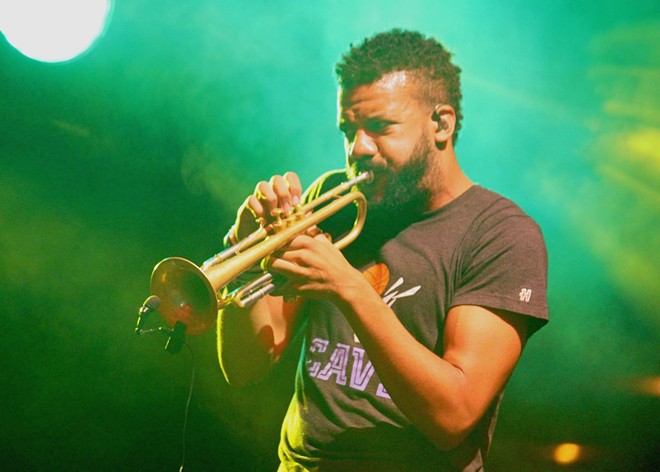 On a blissed-out summer evening, as the Cleveland Browns pieced together a jarring 5-0 victory against the Philadelphia Eagles right across the river, O.A.R. did the sort of thing they've become known for — especially in the wilds of Northeast Ohio. They threw down a career-spanning heater of a show, keeping a near-capacity crowd at Nautica on their feet and positively groovin' all night.

I think a lot about the crowd these days at shows, and the vibes at O.A.R. last night were on the sunnier side of things. People weren't yammering away into Facetime videos with their nieces and nephews; they weren't complaining about the cost of waterproofing; they weren't, far as I could tell, dragging the outside world into the show. The crowd was committed, cheering and dancing, and, to me, somehow, this matters greatly.

Click here for a photo gallery from the show

As for the actual show, O.A.R. was in fine form. The brass section — Jerry DiPizzo on sax and Jon Lampley on trumpet (see photo) — stole the show several times over. They had come to jam, and Marc Roberge gave them ample room to do so.

And there was a fair amount of growth onstage. I've seen O.A.R. many times over the years, and the various eras of the band don't diverge wildly. (Five years ago, I felt much the same as I do this morning.) But last night's show definitely saw a certain zeal to the creative stage presence; a nifty segue from "Shattered" into "Love and Memories" worked perfectly, and the crowd responded excitedly as the chords from the latter crept into the crystal-clear nighttime sky.

O.A.R., Buckeye State devotees that they are, never fail to deliver the sort of zippity-doo-dah headspace that we're all reaping feverishly as summer draws to a close. Labor Day looms, and the midterm elections are right around the corner. The price of gasoline is gamboling heavenward, and something called Blockland is sniffing around the halls of public government and social media. Strange times in Cleveland. Isn't it nice to just get outside and dance?

Dangerous Connection
City on Down
One Shot
Road Outside Columbus
Shattered (Turn the Car Around) >
Love and Memories
Whose Chariot?
Black Rock
I Go Through
I Feel Home
Caroline The Wrecking Ball
Hey Girl
About Mr. Brown
About An Hour Ago
Miss You All the Time
Heaven

Encore:
Peace
Get Away
That Was a Crazy Game of Poker