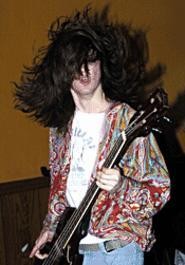 Walter Novak
Black Diamonds, lettin' it fly December 29 at the Beachland.
Odious Sanction has signed a new deal with Unique Leader, a California label with an international roster of brutal death-metal bands that includes Trauma, Vile, and Internal Suffering.

"Odious Sanction has the intensity that Unique Leader looks for," says label founder Erik Lindmark. "But they also add new elements. They bring a lot to the label, and I think they'll appeal to many."

The band's new disc, to be titled No Motivation to Live, will be released on February 21. The one-album deal is for a worldwide release, with U.S. distribution through the Caroline network. The group plans to tour the East Coast and Canada in May and June.

Odious Sanction has been on Lindmark's radar since 1998, when bassist Derek Boyer, now with Suffocation, gave him Punishment of Life, the band's third demo. Composed of Painesville and Chardon natives, the trio has a history that traces to 1992. Odious Sanction recorded its latest album at Painesville's Five Fifths Studio, with Matt Lucy (Stresslord) producing and engineering.

"We're grindy, but it's not really death metal," says drummer Steve Shalaty, who also plays with New York death legend Immolation. "It's pissed, but it's not really hardcore. The bottom line for us is the pit. Whether we're flying or creeping along, we want the riff to induce movement."

· Guitarist Phil Fulkerson died suddenly on December 21. In the '90s, Fulkerson played guitar in punk notables the TKOs and the Volts. He was 30.

· Cleveland's Chimaira will release a two-disc edition of its latest, self-titled LP on Tuesday, January 10. This version has the same content as the expanded European edition (two covers of Ascension songs and seven live cuts), with new packaging. The album has sold over 45,000 copies and made year-end best-of lists in metal mags Revolver and Decibel.

· WMMS made the December 15 issue of Rolling Stone, sort of: Pat Spurgeon of California indie rockers Rogue Wave appears on page 41 in a vintage Buzzard shirt.

· Los Angeles-based metal/hard-rock label Corporate Punishment (Shenoah, Rikets) will release the sophomore album from Cleveland's Switched on Tuesday, January 10. Ghosts in the Machine will feature new and unreleased material from the band, which is helmed by producer Ben Schigel (Chimaira, Drowning Pool). The band will reunite for a small tour to promote the double CD.

· Cleveland guitar legend Bill deArango passed away December 26 at age 85. DeArango's career stretched back to the national bebop scene of the 1940s, and he had played with famous musicians including Dizzy Gillespie and Charlie Parker. He eventually settled in Cleveland, mentoring generations of musicians from his self-titled music shop. His protégés went on to play in the James Gang and Rod Stewart's band, among others.

"Bill was sort of like an angel to a host of Cleveland musicians," says Todd Sharp, who played in Cleveland's E.T. Hooley and later Hall & Oates. "He showed us how to bring something deeper into music, and how to let music deepen us."