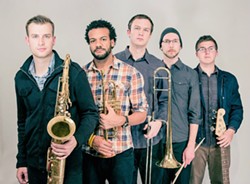 Courtesy of Hello Wendy PR
Coming from what he says is a “musical family” certainly helped trumpet player Jon Lampley. Lampley, who grew up in Tallmadge, says his cousins all sang or played an instrument. They inspired him to take a musical instrument, and he's now one of the leaders of Huntertones, an up-and-coming jazz act that’s building a name for itself on account of its high-energy approach.

“As I got older, I knew I wanted to play music,” says Lampley via phone from Colorado, where he was attending a wedding. “Trumpet was the instrument that was natural for me to play. It worked out conveniently for me that way. I was in the fifth grade band, and I liked trumpet and trombone better than the reed instruments.”

A “huge Ohio State fan,” he attended the school not only to get an education in music but also to play in the marching band known as the Best Damn Band in the Land.

“It was amazing,” he says of the experience. “It was one of the biggest aspects of my college career. I studied music but the marching band was a whole separate thing. It’s a rigorous tryout and heavy rehearsals. It’s a huge time commitment, but it’s one of the best experiences ever. Getting to be out on the field in front of 105,000 people was something I always dreamed of doing. Getting to ‘dot the i’ was a really special day. I play a lot of tuba now and I studied trumpet so all of the tuba stuff is directly attributed to the time I spent with the marching band.”

While at OSU, he also joined the jam band O.A.R. after one of his teachers introduced him to the band’s sax player who was looking to put together a horn section.

“I was a junior in college and freaking out,” he says. “I did that first summer. Two weeks ago, I finished my fifth summer with them. It’s been an awesome experience to play with those guys. When I was still in college, there would be some gigs on weekends. I would be backstage doing homework at the O.A.R. show. That’s been a great experience.”

Initially, he started performing with the other members of Huntertones in the Art Blakey ensemble. That group would evolve into Huntertones.

“We got tight through playing music at Ohio State,” Lampley says of the experience. “We became friends through music school and started playing shows around town. It grew from there.”

Taking the name from a street he used to live on, Lampley christened the group Huntertones. That was a couple of years ago, and the band’s now evolved into something of a force. Members have collaborated with artists such as Ricky Martin, Allen Stone, Phillip Phillips, Jon Batiste, Snarky Puppy, Red Baraat, Eric Krasno, Fred Wesley, Rashawn Ross and Lena Hall. They’ve jammed with ensembles such as the Glenn Miller Orchestra, Jacob Fred Jazz Odyssey, the Columbus Jazz Orchestra and the Cleveland Jazz Orchestra. Lampley has even had a few guest spots with the band playing on Stephen Colbert’s new late-night show.

For its forthcoming self-titled EP, the band holed up at a studio in Columbus when it had a day off between gigs in Cleveland and Toronto. It recorded another handful of songs at as studio in New York, its current home.

“We recorded five songs with the 7-person version of the band,” Lampley says. “It’s three horns, a rhythm section plus keyboards. For the trio format songs, we recorded at a studio in New York. We’re excited about this record. It’s original music and we tried to capture the live energy of the band, which is hard to do in a studio. This album does it better than any of the others. On this tour, we’re doing two nights in Columbus and we’ll be recording those shows for a live album we’ll release later next year.”

Due out next month, the new EP opens with the spry “Rumpus Time,” a song driven by a funky guitar riff. The album concludes with “The Gwiz,” a pensive number that features a woozy horn solo and some snappy percussion.

“[Trombone/beatbox player] Chris Ott wrote ‘Rumpus Time,’” says Lampley. “It’s funk and soul inspired. The title comes from the movie Step Brothers, which we love. It defines what we’re trying to do. It’s high energy and funky. There are parts that are flashy. We want to keep it to the point that you can dance to it. We don’t want to have solos that are so long that it becomes inaccessible to someone who just wants to rock out. We want it to appeal to someone who just wants to dance and it will get you moving.”

While jazz can be a rather refined art form with limited appeal, Huntertones look to break that stereotype.

“The art form itself is one of the only music genres that’s truly American,” Lampley explains. “It’s inspired by African rhythms but the music was born here. The equivalent of Top 40 is now is what jazz was in the ’30s and ’40s and ’50s. Today, it’s hard to use that one word to define groups that produce music in the genre. There are bands that still play straight ahead jazz and they’ll always appeal to an audience that wants that. Younger musicians are making music that appeals to people who like jazz and the history and tradition but also has much appeal as pop or soul. Bands are starting to do that successfully. [The jazz act] Snarky Puppy does that really well. They play rock, hip-hop and jazz. We’re trying to do that because we don’t just listen to jazz. We listen to rock, hop-hop, singer-songwriter stuff. When you write music, it’s influenced by what you listen to. Our music comes from all those things we’re influenced by, and we want to reach all those people who enjoy those types of music.”