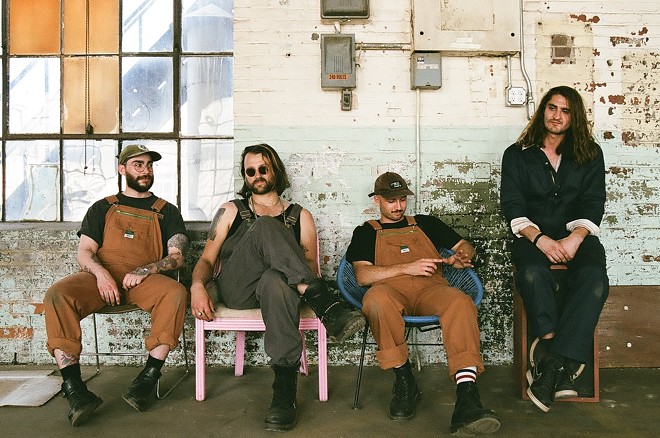 Courtesy of Radderall
Radderall.
In 2011, local singer-songwriter Zach Taneyhill began writing his own songs using various keyboards and guitars he recorded directly into Garageband for demo purposes. He’d send demos to friend Jonny McAllister for feedback, and eventually he sent them to Madeline Campbell at Treelady Studios.

Campbell invited Taneyhill and McAllister to record the songs at her studio for what would become the first full-length offering from Radderall, a Cleveland- and Columbus- based dream pop, shoegaze and glam rock outfit.

The process for the band’s second record, 2020’s If Ever, was the essentially the same, with McAllister adding several contributions to songwriting and lyrics.

For the forthcoming album that's due out Sept. 2, the band took a different approach. Taneyhill demoed the tracks on a Tascam 464 4-track tape recorder. Almost all of the songs were written during the pandemic.

“At the time, I'd started experimenting with a Juno 106 and Yamaha DX7 synthesizer and utilizing drum machines,” Taneyhill says in a press release about the new album. “These instruments changed how I viewed songwriting, and placed me in a more pop-oriented mindset. We use some elements of these demos in the final recordings (drum machines, synthesizers, vocal takes, bass lines), which gives the album a sort of lo-fi, warm feeling. That being said, we did a lot of work in Warren [Davidson's] studio, re-recording parts and adding parts to each song. Jon's guitar work is all over the record, and shines through on a track that he penned called ‘As Friends.’  Warren gives each song the big sounding production you'll hear throughout. Alex [Eliopolous's] unique drumming style grounds the record and gives the songs an almost "live" feeling. Genre-wise the album is all over the place. We characterize ourselves as shoegaze and dream pop, but each track has its nuances. You'll hear the Beach Boys on the opening track, hints of R&B on the Muzzy Fossa-produced track, ‘How Can I?,’ jazz and fusion on ‘Another Time I Can't Pretend!’ and Western influences on ‘Birthday.’”

The new album is more collaborative, and the addition of Eliopolous and Davidson enables the band to perform the tracks live.

“Throughout the record there are themes of time passing, indebtedness to the ones I love, life after loss and moving on,” says Taneyhill. “If there are any takeaways from the music, I hope it helps the listener live more in the moment, empathize more with the world, and realize that a broken heart doesn't last forever.

Radderall celebrates the release of its new single, the shimmering “Celebrate,” with a special show on Friday at the Happy Dog with local acts Napsack and Sure, Machine. The band also performs on Sept. 1 on WRUW, on Sept. 2 at MOTR PUB in Cincinnati and on Sept. 3 at both the Lake Affect Studios Superior Block Party and at the Happy Dog.