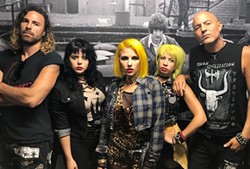 Adrenaline PR
Like so many cutting edge bands that came before them, Barb Wire Dolls got by with a little help from a certain Rodney Bingenheimer. Before most Americans knew anything about the Grecian punk rock act, the influential DJ began playing the band's music on his radio program, subsequently building a stateside buzz for the indie act that had only self-released its albums at that point.

“Somehow, Rodney Bingenheimer discovered our music and starting playing us,” says singer Isis Queen in a recent phone interview. Barb Wire Dolls perform on Friday, Oct. 27, at Musica in Akron. “He discovered bands like David Bowie and the Sex Pistols and Guns N Roses. He got our music and started playing our demo on his radio show. That was the best thing that ever happened to us. He invited us to play a show in L.A. We accepted and sold everything we had right then and there [to get to the States]. We sold out the [L.A. club] Roxy and got signed by [Motorhead’s late singer-bassist] Lemmy Kilmister.”

To hear Queen explain it, growing up in Greece in the late ‘90s and early 2000s wasn’t that much different than growing up in the States where acts like Eminem and Jay-Z ruled the airwaves.

Queen, however, had different musical interests than her peers.

“I have always gravitated toward rock ’n’ roll even though my generation was all about hip-hop and rap,” she says. “My go-to music was ’50s Motown and rockabilly. That was natural for me. I then gravitated to punk rock because later on, I was fed up and sick of all the music that was pushed in the mainstream. I loved old rock ’n’ roll from the ‘70s, even classic rock, because the lyrics meant something and the music had a real energy. All the music from my generation is just flash-in-the-pan stuff that had no real emotion to it.”

Originally, the band formed when members met in what Queen describes as “an artist commune” out in the mountains of Crete. Queen cites punk acts such as the Ramones, X and the New York Dolls as influences.

“The commune that we lived in was a 600-year-old group of houses,” she explains. “There were international artists that were there. I wanted to express myself so we started a punk band just for the fun of it. We couldn’t play shows because no one wanted to listen to punk rock, and no one would book us. We had to go to Athens, and we found a bar that would let us play on Sundays. We’d get whatever bands were just forming and would do it every weekend. It was great. Somehow, a scene started.”

Thanks to some very supportive fans, the band self-funded its first few releases and even managed to record its debut album, 2012’s Slit, in Chicago with engineer extraordinaire Steve Albini (PJ Harvey, Bush).

“We have great fans,” says Queen. “Our families didn’t put a dime into it. They can’t help us out that way because they’re not capable. We had to find jobs. I worked in a surf shop for the first year when we lived in L.A., but it wasn’t enough. Now, we just stay at our friends’ houses. We don’t even have a home here in the States. We stay with fans who have become friends. Every album we created — somehow our fans have pitched in.”

When it came time to record their latest album, Rub My Mind, band members decided to work with Jay Baumgardner, the guy who produced their previous effort, 2016’s Desperate. The group had plans to record at Rancho De La Luna, the Joshua Tree studio where Queens of the Stone Age and Kyuss had recorded their albums.

“We were invited to record there,” says Queen. “It’s a huge honor. We accepted that invitation. When we were driving there, we were just finished up our tour and on the phone with [Eagles of Death metal guitarist] Dave [Catching] when he was on tour in Europe. Ten minutes later, the attacks happened in Paris. It was a terrifying situation. We literally just got off the phone with him, and an hour later we found out about the shooting. We didn’t intend to record the album anymore. It was a crazy situation. Dave contacted us and said he still wanted us to come to the studio. We told him we thought the sessions were over. He said, ‘The music must go on. They can’t take this from us.’ That inspired everything.”

At that point, the group had only written a couple of songs. But inspired by Catching’s resilience, it quickly wrote the rest of the album’s tracks.

“The songs were written by the emotions and frustrations and pure shock of it all,” says Queen. “We’re very proud of the album.”

The Green Day-inspired “If I Fall” features a rolling bass riff and hiccupping vocals while “Desert Song,” a track that includes a mix of acoustic and electric guitars, comes off as a classic power ballad.

“We’re all looking for answers,” says Queen when asked about “Desert Song.” “The only thing that’s certain in life is death. You have to overcome those fears you have about living your life. It’s about being free. It’s about breaking free from all those things you’re brought up with and finding the power that’s inside of you.”

“57 is a two-piece rock band, and they play a grunge-y, punk-y mix of loud rock ’n’ roll,” says Queen. “They’re brother and sister. The sister is one drums, and the brother is on guitar. They’re cute little Asians but as soon as they start to play, they’re monsters. They opened for us at a show in England, and we were shocked. When we organized this tour, we reached out to them. It’s first time playing in the U.S. Svetlanas are good friends of ours and we played a show in Italy together and became great friends after that. They’re a female-fronted hardcore band. It’s a very epic. It’s a band you cannot miss. It’s really a kick ass lineup.”