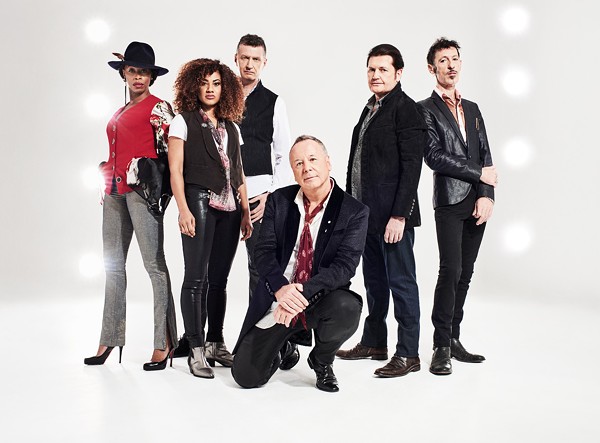 Famously, the Rolling Stones once said, “You can’t always get what you want,” but for Jim Kerr of Simple Minds, sometimes you get exactly what you want.

“It’s not often that you get the record that was in your head, for whatever reason. Some you get mixed results. And sometimes it’s good, but it still wasn’t in your head,” he says, calling from Glasgow. Simple Minds perform at 7:30 p.m. on Thursday, Oct. 11, at Hard Rock Live. “[Walk Between Worlds] was the record that we wanted. I think we hit the sweet spot in terms of, we wanted a record that could conjure up the ghosts of the past, the Simple Minds sound, the early ’80s, the art-rock, etc. etc. But we didn’t want it to be some act of retro. We wanted it to be contemporary also. Now, who wouldn’t want that? That sounds great, but how do you do it? Because the very definition or contradiction, then is not now. Then was 20 or 30 years ago, the world has changed, technology has changed, we’ve changed. Everything’s changed. How are you going to conjure that up? I don’t know, I think we managed to do it.

The upcoming show at Hard Rock Live will mark the first time that Simple Minds has played Northeast Ohio since a 1995 gig at the Cleveland Agora. It’s long overdue, and Kerr is equally enthused about the return engagement, which is part of the most extensive U.S. tour they’ve done in years.

“Listen, the feeling is mutual. I was beginning to worry and wonder if we’d ever get the chance to come back,” he says. “But patience has paid off, and more importantly, I think you’re going to get the band in great form, so if it’s anything to do with us, we’ll make sure it’s been worth the wait.”

They’ll perform two sets featuring material from Walk Between Worlds, which was released earlier this year, but Kerr promises that there will also be plenty of songs from across their lengthy career. The aim, he says, is to put something into the setlist for everyone.

“A lot of people are jonesing to hear stuff that they never thought that they would hear or they only heard once twenty years ago,” he says. “I mean, listen, it’s a great problem to have, but it is always a problem trying to get a set that ticks all of the boxes. And when I say all of the boxes, you know, the hardcore, we want to go back, but we want to show that we’re contemporary. We want to play all of the songs people will come out to hear and we want to play some stuff people don’t think they’re going to hear. We’ll get a set together that will go a long way to ticking as many of the boxes as possible. Inevitably, someone will say, 'You never play my favorite song,' but you know, hopefully we do well and we get back sooner rather than later. Therefore, maybe they’ll get to hear their favorite song the next time, if not this time.”

Buoyed by the positive reception to their 2014 album, Big Music, the group has been in a positive creative space, something which was intensified by the experience of stripping things back for 2016’s Acoustic. They followed the album with a full acoustic tour that was commemorated with the release of last year's Acoustic in Concert. When they weren’t on stage, they were still creating.

“The thing that we do is when we’re not touring, we’re always writing. Through the years, there’s just a mountain of stuff. Some of that stuff is much more complete than others. But there’s a mountain of stuff and you know, the very fact that we spent time working on it, we think that there’s quality there,” Kerr says, when asked how some of the songs on Walk Between Worlds took shape. “But often, with an idea, that missing piece doesn’t always pop up, so we think it’s nearly there but it’s not there and we’ll come back to it on our next album. And inevitably, new ideas come over the horizon and it gets pushed back further and further. And then lo and behold, sometimes something, we’ll need a lyric. We’ve got the music, but the lyric is not there, or we have the lyric, but we don’t have the middle eight. So [it goes on the] backburner.”

But, as Kerr points out, while they weren’t afraid to dig back into the archives, they also worked very much in the present, writing plenty of new material for the album. A song like "The Signal and the Noise" was written only a couple of months before the album. The title track was a new song too.

"So it’s not all old stuff," says Kerr, "but it draws on anything from a month ago to 20 years ago.”

“The Signal and the Noise” is a reminder that spending time in the real world and not a virtual one is quite important.

“I just spent three days hiking in the Highlands. That’s pretty much what ‘The Signal and the Noise’ is about, in the sense that like everyone else, I love the technology. I love my phones, my laptops, all of the stuff. But you’ve got to get away from it. The real energy, the real power, you’ve got to communicate, as in talking to people,” he says. “You’ve got to look people in the eyes. So the song, I’m not sure if it’s a plea or I’m not sure if I’m pontificating. If I am, I’m pontificating to myself and saying, ‘Take off the headphones,’ put off the glasses, do other stuff, get out there and ignore the hype.’ Get out there where your senses become sort of alive again or sharpened. So the song is about this bipolar world that we’re all in now, including me, of course. As I said, I’m as typical as anyone.”

Kerr, who was once married to Akron native Chrissie Hynde, says Cleveland has a special place in his heart too.

"Cleveland’s a real music town, and it always has been," he says. "Certainly, the Cleveland that Chrissie would have been brought up in and the Cleveland, the tail end when I was there, Akron and the neighboring stuff. It’s kind of real non-bullshitty people that I felt. I could relate to all of that. Chrissie’s parents, I really liked them and respected them. Cleveland will always be something that’s a little bit special to me.”

It’s been many years and a lot of water under the bridge since he and Hynde were married in the ‘80s, later divorcing in 1990. Earlier this year, they were back on tour together, playing a series of co-headlining dates this past summer that featured the Pretenders and Simple Minds on the same bill.

“It’s a funny thing. Recently, I was backstage and Chrissie was on and strangely, you know, when I listen, I don’t think, ‘Oh, that’s my ex-wife.’ I’m just like, 'Wow, Chrissie Hynde, how cool is that? What about this song, what about that song.' In fact, what I’m thinking is, 'How are we going to follow this?' Because you know, she’s one of the real greats. That’s why we’re all so happy to do this — everyone in Simple Minds, our crew and everyone, they just think she’s great. So that was good, but then the next day, it was different, because our kid was there and our grandkids were there. We’re Grandma and Granddad, that’s just the way it is! [Laughs] So we can separate that, but we’re cool."