On Its First U.S. Tour in Seven Years, British Rock Act James Comes to the Agora Next Week 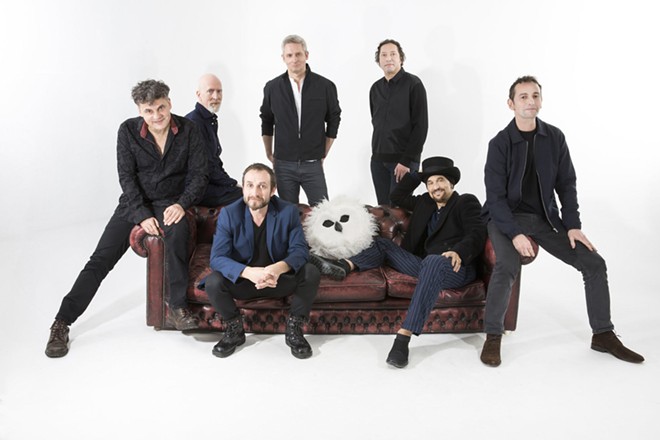 Courtesy of Alexandra Baker
The British rock band James emerged from gritty Manchester England in the early ’80s and almost immediately singed to Factory Records, the storied label run by the late Tony Wilson. Success followed as the band would go on to release nearly 20 Top 40 singles in the UK. It would famously support the Smiths on their 1985 tour in support of Meat is Murder.

But in 2001, after a really terrific run, all was not well, and singer Tim Booth left the group.

“To me, it was too much addiction going on,” says Booth during a recent phone interview when asked about his departure. The reconstituted band performs at 6:30 p.m. on Friday, July 19, at the Agora with the Psychedelic Furs and Dear Boy. “We were quite fucked up at that time. I figured it was time to leave. I loved working with everyone, and Pleased to Meet You is one of my favorite James albums, but it was too difficult on the day to day.”

The band reformed in 2007 and has released several albums since then. Last year’s Living in Extraordinary Times has been so popular and successful, it’s resulted in the band playing to the biggest audiences ever. The current tour marks the first time James has toured in North America since their sold out 2012 mini-tour.

Highlights on Living in Extraordinary Times include the noisy “Hank,” a song about the current political climate in the States that features distorted guitars and snarling vocals, and “Coming Home (Pt. 2),” a song that features a cameo from Brian Eno, who plays keyboards. President Trump’s racist rants inspired “Heads,” a track driven by ratcheting percussion.

“We keep moving forward, and it’s kind of unconscious,” says Booth when asked about the band's approach on the album. “Our bass player Jim Glennie and our keyboard player Mark Hunter have become central. The guitar is on it, but there are lots of keyboards. Those are the major differences.”

Booth says the band has never sounded better than it does now, and he cites the ability to alter setlists from night to night as one of its major strengths.

“We’re putting out records, and it’s fantastic," he says. "We have a brand-new audience with our last few records. They come to hear the new stuff. They don’t know the old stuff. It’s actually kind of problematic. We change the set list each night to try to accommodate both the old and new fans. With James, you have to expect the unexpected. We change the sets depending on how we’re feeling and what the audience looks like. Nintey-nine percent of bands do the same set every night, and they’re going through the motions. We want our concerts to be a living piece of communication that changes from night to night.”