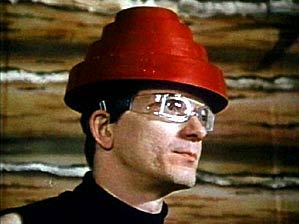 The Rubber City produced about 3 percent of the 1980s’ one-hit wonder artists, according to VH1’s Top 100 One-Hit Wonders of the 80s countdown.

No Cleveland artists made the cut — we guess Michael Stanley and Hatrix were recognized as having for more substantial bodies of work.

Akron natives Buckner and Garcia crashed the countdown at No. 98, with “Pac-Man Fever”.

The Waitresses’ “I Know What Boys Like” landed at No. 34.

And Devo’s “Whip It” was the top performer, sandwiched at No. 15, above “99 Luftballoons,” but behind “In a Big Country.”

As with all countdowns, the list’s methodology is debatable. The list-makers had difficulty distinguishing between true one-hit wonders like Toni Basil (“Mickey,” No. 6) and three-hit wonders with one standout song (Thomas Dolby, “She Blinded Me With Science,” No. 13).

Things we learned from the countdown: Tom Cochrane, that “Life Is a Highway” dude, sang for Red Rider, whose WNCX staple “Lunatic Fringe” was dramatically used in wrestling movie Vision Quest. And apparently the singer from Kajagoogoo (“Too Shy,” No. 9) was a guy. Good song. — D.X. Ferris