Ovaries to the Wall 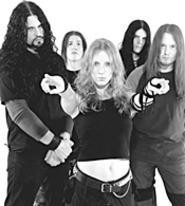 But over the years, a handful of brave gals have muscled their way into metal and held their own against the genre's stifling chauvinism. One of the boldest among them, Arch Enemy growler Angela Gossow, hits the House of Blues this Saturday. In honor of her visit, we pay tribute to the finest female-sung metal anthems of all time. They prove that you don't need to have balls to, you know, have balls.

Arch Enemy, "Enemy Within" (Century Media) -- With a voice that sounds like a garbage disposal choking on silverware, Angela Gossow truly broke the gender barrier in death metal. She debuted with the Swede extreme-metal pacesetters on 2001's Wages of Sin, a disc of bile-filled anthems that surely had Beelzebub's Bic in the air. Check out the album-opening "Enemy Within," where Gossow urges listeners to commit suicide, over riffs that stomp and snort like satanic Clydesdales, played by her soon-to-be-husband Michael Amott. Now there's a guy who never leaves the toilet seat up.

Kittie, "Charlotte" (Artemis) -- Having grown up attending Pantera shows, where gals are greeted with chants of "Show me your tits!" by dudes who otherwise must pay to see them, Kittie turned the tables on heavy metal lunkheads with its gold-selling 2000 debut, Spit. The album's centerpiece is "Charlotte," a girl's comeuppance tale with a chorus that could dislodge vertebrae. Singer Morgan Lander sings prettily of chopping off the head of a boy who's done her wrong and then hiding it in her closet. Better yet is the video, where a chiseled dude in underwear and angel wings is chased, then ripped apart, by a gang of young women. Consider the karmic debt created by Mötley Crüe's "Girls, Girls, Girls" paid in full.

Cycle Sluts From Hell, "I Wish You Were a Beer" (Sony) -- Kind of like the Earth reversing its orbit, there's really no way that a band with members named Venus Penis Crusher and She-Fire of Ice could not kick ass. Especially when it's a band of Jersey biker chicks armed with songs like "By the Balls" and "Bad Ass Mama." But the real highlight of the Sluts' self-titled 1991 debut (also their last) is this campy thrash classic. It's a John Waters-worthy tune with speed-metal riffs and a gang-vocal chorus denouncing poseurs and envisioning a utopian state where a-holes are transformed into alcohol. We'll drink to that.

Girlschool, "Demolition Boys" (Stiff Records) -- Much like the bespectacled protagonist in Daniel Clowes' sweetly sardonic movie Ghost World, Girlschool proved that girls named Enid could in fact rock. On their 1980 debut, the British quartet reveled in the sexual objectification that's as much a part of metal as leather and low SAT scores -- only this time it was the "Demolition Boys" being leered at. A sweet-and-sour rocker, with a chorus that sounds as if it's sung by drunken cheerleaders, "Demolition Boys" exploded sexual stereotypes.

Wendy O., "It's My Life" (Passport) -- As a member of the Plasmatics, Wendy O. Williams was once arrested at a Cleveland gig for her Cinemax After Dark stage show, which, at various points in the band's career, featured Wendy chain-sawing guitars in half, blowing up Cadillacs, and simulating masturbation -- all while topless, of course. She didn't calm down any after splitting from the band in the early '80s. Instead, she hooked up with Gene Simmons, who produced her solo debut of hot-and-bothered pop metal, WOW. "It's My Life" is the first single from the down-and-dirty disc, originally a demo left over from Kiss's Creatures of the Night sessions. In Williams' sticky hands, it became a catty call to arms against female submissiveness -- "I swear when I want/I wear what I like/Yeah!" she bellowed over purring guitars. Ovaries across the world hardened immediately.