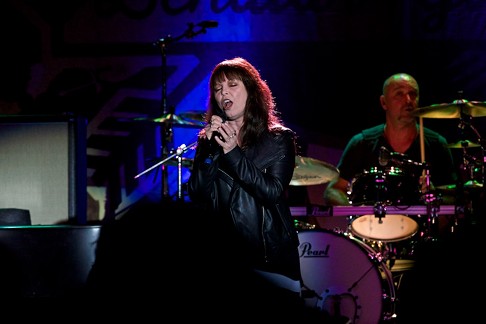 Scott Sandberg
It’s been 36 years since Pat Benatar and Neil Giraldo first began their journey together with an album called In the Heat of the Night and a song that quickly found a lot of success called “Heartbreaker.” The album was released in August of 1979 and by November of that same year, they were playing a sweaty gig at the Cleveland Agora which was broadcast by WMMS. It’s all part of the early beginnings of a relationship between Benatar and Cleveland that has stayed intact over the years that have followed since then.

A retrospective video that played prior to the start of their Hard Rock Live show on Friday night mixed old pictures with audio of Benatar and Giraldo sharing their memories of everything that has happened as they traveled the road from just starting out to eventually finding huge success — the kind that fills arenas and floods the radio with hit singles. In the midst of the image montage, there were shots of the Agora, underlining the important role that Cleveland played in their success story. You can see photos from the Hard Rock Live show here.

With a good chunk of the reminiscing taken care of by that visual montage, all that was left to cover was the music — and Benatar and Giraldo came well-equipped to do just that, armed with the “Holy 14,” Benatar’s title for the impressive 14 Top 40 singles that they had in their arsenal. Over the course of their hour and forty minute set, they played nearly all of those heavy hitters —- opening with the harmony-soaked, synth-driven “Shadows of the Night” that was a quick reminder of their ‘80s lineage and moving quickly into more muscular guitar-heavy direction with “All Fired Up,” the second song of the night that kicked things into an even higher gear.

Dressed in black, Benatar and Giraldo kept things pretty focused on the music with a minimal amount of chatter, which was no problem for the sold-out audience in attendance (there’s rarely a leftover seat when the pair comes back to Cleveland). There were some interesting anecdotes along the way however, with Benatar telling the audience that in the early days, “We basically wrote about other people’s problems, but as we got more secure, we started writing about our own love life,” as she introduced the now-classic “Promises in the Dark.”

Giraldo, a Parma native, is the person who filled the role that Benatar once envisioned having “a partner, like Jimmy Page and Robert Plant.” That’s a pretty heavy comparison, but indeed, Benatar had and still has the powerful lungs and Giraldo has no shortage of riffs — seeing the pair do their thing, it comes through that while they could have easily gotten dragged down by an overload of successful sappy ballads, they instead kept things generally in a more guitar-focused direction, turning out a stack of poppy radio hits that still manage to pack a pretty heavy punch in the live setting.

In addition to the hits, Benatar and Giraldo also worked in some lesser-heard material —- including “One Love,” a fan-voted setlist inclusion from 1988’s Wide Awake in Dreamland and happily, later in the set, the sludgy grooves of “Everybody Lay Down,” from 1993’s Gravity’s Rainbow, which kicked off the encores.

Benatar threw some hints from the stage that during time off from touring, they had been working on new material —- something which Giraldo himself confirmed during an interview with Scene prior to the show. After more than a decade since their last new offering —- 2003’s Go album — new songs from the pair would be a welcome thing. But for the moment, it was clear that the crowd at Hard Rock Live was quite happy with revisiting the “Holy 14” and the associated memories that are attached to those songs.