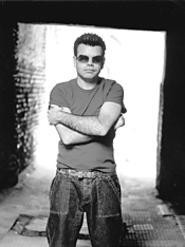 Paul Oakenfold
You can peg British DJ Paul Oakenfold five ways: as record producer, remixer, A&R man, label head, and gasbag. Though he is notoriously big-headed, Oakie's reputation as one of the major engines behind global club culture is honestly banked. From the days of his early-'80s residency as a teenager in West Harlem to the bass-heavy production he laid down for the Happy Mondays' Pills 'n' Thrills and Bellyaches, Oakenfold has always had a knack for pushing dance music's frontiers. He even signed Salt-N-Pepa to their first U.K. label, Champion. But his current vogue grew out of early trips to then-obscure Ibiza. The isle's infamous holiday-clubbing ambience has reached the ears of (sub)urban kids everywhere, partly as a result of Oakenfold's transplantation of its vibe to London clubs and, later, to New York. Paul Oakenfold really is one of the best DJs in the world -- a title claimed by every Tom, Dick, and Henrietta lately. So if you missed him on his first trip to Cleveland last fall, be sure to, uh, scare up some tix for this special Halloween show.