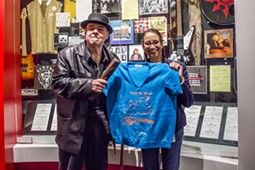 Recently, when he compiled information about his past in a book for the band’s current Coed Jail! tour, he found one of the sweatshirts that he and “his team” had while he worked at the paper. He writes about it in an Ubu scrapbook he released earlier this year.

Earlier today, Thomas, who brings Ubu to the Beachland on July 2, stopped at the Rock Hall to donate the item.

“It looks so tidy,” Thomas said as he looked over the Cleveland Rocks exhibit where several Rocket/Ubu items are on display. “It should really just be a pile of shit.”

As he handed the shirt over to curator Meredith Rutledge-Borger, he admitted he couldn’t quite remember why he had it in the first place.

“I don’t actually remember this shirt other than it showed up on my farm in Pennsylvania where I discovered it about five years ago,” Thomas said as he sat in the Rock Hall administrative offices. “It’s far too small to fit me, so it wasn’t mine. It had to have been from about ’73 or ’74, probably ’73. That’s when I was doing the [Croc o Bush] column. I had pretty free reign. I would write up some convoluted joke or absurdist mind play. I became known by the pseudonym Crocus Behemoth.”

Splattered with paint, the T-shirt features a drawing of the “Torfus,” the mutation that appeared in the Croc o Bush columns. It will become part of the Cleveland Rocks exhibit.

Thomas also plans to donate a lawn mower roller bar that was used at the band’s very first gig at Pirate’s Cove in 1976.

“It’s one of the main percussion things from that day,” he said of the rusted roller bar that resembles a small pipe. “It’s our kind of maraca. It’s got a bolt that’s loose in there. It’s not smooth. It’s Pere Ubu maraca where it’s angular and somewhat random and rather loud. That’s why we liked it and used it on Dub Housing and The Modern Dance. I stopped using it after a few years later some teenager came up to me and said that Einstürzende Neubauten played pieces of metal as if I stole it all from them.”

Fire Records, home to Pere Ubu, has also given us permission to post this exclusive, previously unreleased video of Thomas talking about Cleveland.