As part of the "Jolly Rancher Rocks" tour 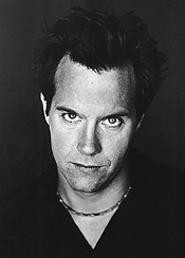 Peter Searcy: Jolly Rancher's got his back.
Singer-guitarist Peter Searcy, who performs with Neve at Tower City's Hard Rock Café on March 17, as part of the "Jolly Rancher Rocks" tour, will have played in Cleveland more times in the past two months than he has in the previous year. Searcy, who lives in Louisville, is on the road to support his new album, Could You Please and Thank You, and was in town just over a month ago on a brief promo tour.

"I like Cleveland; we went to the Rock and Roll Hall of Fame today, which was kind of fun," he said during soundcheck for his show last month at the Grog Shop.

Searcy initially formed the band Squirrel Bait in 1984 -- while he was still in high school. After two albums, 1985's Squirrel Bait and 1987's Skag Heaven (both of which have been reissued by Drag City Records), the band called it quits. But not without leaving its mark. Along with bands such as Hüsker Dü and the Minutemen, Squirrel Bait influenced a number of alternative rock bands (from grunge to post-rock) that emerged in the late '80s and '90s. Searcy played in two other bands, Big Wheel and Starbilly (which once opened for Seven Mary Three at the Grog Shop), but has always had to hold part-time jobs to make ends meet. Until now.

"I never stopped making music," Searcy said. "At different points in my life, when I felt like I couldn't wait another table or deliver another pizza or play another show to three people, I kept going. My biggest expectation for Could You Please and Thank You [out on Time Bomb Recordings] is just that I continue to make music, because that's all I have ever done. It's just happened now where I can do it and make a living. That's nice. I can put a lot more focus into making music when I don't have to worry about how many shifts I have to pick up waiting tables. I'd like to sell a ton of albums -- who wouldn't? But I'd like one of those kinds of careers that are the ones with longevity. Those artists with a core audience can always tour. That would be great -- to have a sustained, long career."

To that extent, Searcy's new album is a change of pace. While Squirrel Bait was often ragged and rough around the edges (and Searcy's hoarse vocals compared to Paul Westerberg), Could You Please and Thank You goes down a lot smoother, even if its subject matter (relationships gone awry) is sometimes painful.

"It's only straightforward pop because that's the way it was written, and not by any grand scheme," Searcy said, adding that he's now engaged and only writing about old relationships that didn't work out. "I think I'm writing tighter pop songs than I wrote before. In the past, I think I tried to be completely original on everything, and with this I just relaxed and let the songs naturally happen."

Searcy, who has recorded for indie labels all his life (and maintains he never saw any money from Homestead, which initially released the Squirrel Bait albums), says he isn't bothered by corporate sponsorship. In fact, he cites the benefits, rather than the pitfalls, of the Jolly Rancher tour, which takes him to Hard Rock Cafés all across the country. All the shows offer free admission and are open to all ages. In addition, the Jolly Rancher candy company is picking up the tab for radio advertisements.

"It's a little better than a beer tour," he says. "There's watermelon and green apple -- and what would doctors' offices be without Jolly Ranchers, anyway?"

If you happen to stop in at the Euclid Tavern (11629 Euclid Avenue) on St. Patrick's Day, you could be forgiven for thinking that Shane MacGowan has reunited with the Pogues (the Irish folk/punk band responsible for great albums such as Rum, Sodomy and the Lash, and If I Should Fall From Grace With God). The Boys From County Hell, a group composed of members of several local bands, have learned some 20 Pogues songs, which they will play over the course of two sets. The band, which formed five months ago, includes singer-guitarist Doug McKean (who even looks like MacGowan, with teeth), singer-guitarist Chris Allen, percussionist Ryan Foltz, guitarist Aaron Pacitti, bassist Bill Watterson, drummer Dave McKean, and accordion player Nick the Clobberer. The McKean brothers play in GC5, Allen plays in Rosavelt, and Watterson plays in Bobby Pulls a Watson.

"Most of the people in the band are punk rockers, so it has a punk feel, but it's all acoustic and has an accordion and a mandolin," explains Pacitti. "It's kind of weird, and I haven't heard anything like it from another Cleveland band. It's been tough learning the songs, because they're not very easy to learn, as we've found out through the past couple of months. When it all comes together, it sounds pretty good."