Pixies Dig into Back Catalog for Masonic Auditorium Concert 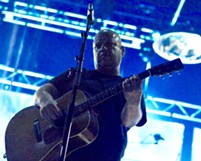 Jon Lichtenberg
Prior to last night’s show before a capacity crowd at Masonic Auditorium, Pixies PR team sent us a note saying, “For this show, Pixies will pretty much be playing what they want when they want.” One look at the set lists from the current tour, and it’s apparent the band makes up a fresh list every night. That’s a rarity in this day and age and certainly made for an exciting show. In fact, some of the songs the band has played on its current tour haven’t even been recorded yet. The concert was part of the final leg of the Pixies' 2013-2015 world tour — a tour without co-founder Kim Deal, who left the group last year — that has been in support of last year’s Indie Cindy, the band's' first new studio album in more than 20 years.

Of course, the band still played its most notable songs. Performing on a backlit stage that featured plexi-glass-like backdrop of squares that reflected the various lights that flickered above the stage, band members appeared as silhouettes as they arrived on stage. The opening number “In Heaven (Lady in the Radiator Song),” a song from the David Lynch flick Eraserhead, featured hushed vocals and acoustic guitars. It started the show on a somber note but the band let the songs provide a sense of momentum. “Wave of Mutilation” picked up the pace a bit but still kept things lowkey. The band took things up a notch about a third of the way through the set as it launched into the manic “Debaser.” That energy carried over into a cover of the Jesus and Mary Chain’s catchy “Head On” that found guitarist Black Francis really sneering as he sang. “Bone Machine” came complete with a beefy bass riff and distorted guitars as Black Francis adopted a high-pitched squeal while he sang. The two song encore included the brittle yet catchy “Here Comes Your Man,” which Black Francis sang with just the right amount of tremble in his voice.

Some 30 years into its career, the Pixies are undoubtedly an acquired taste. Though they influenced bands such as Nirvana and Weezer, they never crossed over to the mainstream to the same extent. Even when he had hair, Black Francis didn’t look like a rock star. And with his head now shaved bald, the pudgy front man doesn’t look any more like a rock star. And yet, the band’s independent spirit and ability to switch tempos (sometimes within a single song) remains impressive.