Playing a Show in All 50 States, Rapper Astronautalis to Perform at Grog Shop on Thursday 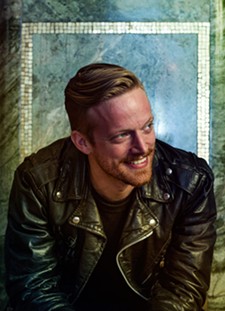 Cameron Wittig
On his fall tour, which includes a stop at the Grog Shop on Thursday, rapper Astronautalis (Charles Bothwell) and his band will play at least one show in each of the 50 states, including Alaska and Hawaii. The rapper says it’s something he’s always wanted to do.

“When I first started touring, the best part of touring was that you get to see so much,” he says via phone. “I was fortunate that I’ve seen 48 out of 50 states. I just have to check off Hawaii and Alaska. As you get closer to the end of that list, it becomes a compulsion to fill that list. Some of these states, you won’t play unless you make a concerted effort to play — places like Delaware and Mississippi. It was a dream years and years ago when I was still sleeping in a Honda. I thought one day I would do a tour of all 50 states. It took a while to get enough of a name that it could be done. I’m at the nice crossroads of having enough of a name to make it happen and still having enough energy to want to do it. I figured that if I didn’t do it now, I’m getting older and I might not want to endeavor this insanity much longer. Now seemed to be the right time.”

Earlier this year, Astronautalis released his fifth studio album, the eclectic Cut the Body Loose. Produced by John Congleton (St. Vincent, Modest Mouse, Bill Callahan), Astronautalis’ fifth studio album, the album features a bit of everything as it starts with the hard-hitting hip-hop number “Kurt Cobain” and then delves into electro-pop with “Kudzu,” a song with percolating percussion and gruff vocals.

Astronautalis wrote the songs as he was touring Europe and visiting remote parts of Central and Eastern Europe.

“I started the writing process in that era when I was having my mind blown by the things I was seeing in the second world where there was this rebellious anarchist and squatter culture,” he says. “Having toured in America for six years at that point, you’d go to Europe, and you’d see a different system of art support and political action. It will throw you for a curve ball. Your preconceived notions about how the world works gets thrown right the fuck out the window, and I couldn’t help write about that.”

The single “Running Away from God” finds Astronautlis delivering rapid-fire raps over a dense mix of instrumentation that includes horns, heavy bass beats and xylophone.

“I had the opportunity to go to Slovakia and New Orleans after Katrina and see this squat and burn system,” he says when asked about the song. “These people went, ‘This is fucked so fuck ’em.’ They took a different path. That’s not a thing that everyone can see. That attitude is the backbone of the record. There is anger and frustration, but the attitude of the people who were running away from God like I talk about is the take away and the crux of the whole thing.”

“It’s built out of a beat from a producer from New York,” says Astronautlis when asked about the tune. “It came pretty basic. It had these 808 drums and spooky synths and we tore the brains out of it. The song ended up being about this shitty relationship used as an allegory for bigger things. It’s a based on a relationship you see in the American south with people who are on the margins who keep trying to claw their way out of the margins but keep sliding back into the margins.”

Astronautalis says playing the songs from the new album, which might be his most ambitious release to date, have made him “fall back in love with rapping after making albums that pulled away from rap music.”

“This is a wonderful and exciting time to be involved with rap music,” he says. “I love the language and the technical trappings that come with [rap music]. It’s fun to play live and the new live show around this album is more rap-influenced. There’s singing and prettiness, but it’s bass heavy, and I’m working my ass off to take this fan base of white indie kids that I’ve fostered over the years and turn them into dance machines.”