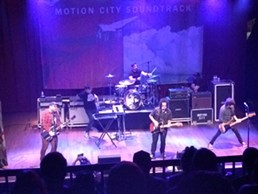 An element of fluidity surrounds a great rock ’n’ roll show played by a band that truly has it figured out. Motion City Soundtrack filled the House of Blues with this sort of feeling last night, not allowing any time for reflection or pause, but in an overwhelmingly positive way. After all, if the hundreds of die-hard fans in attendance were given time to think about how this may be the last time they see the Minneapolis five-piece play live, the entire mood of the room would be at risk of collapsing. Final tours are supposed to be celebratory, right?

If Justin Pierre had asked the House of Blues crowd that exact question mid-set, there’s no doubt in my mind he’d be met with a resounding “yes” — because, looking beyond the obvious unwritten rule of punk rock reverence, the magnetic frontman had them under his thumb the whole night. Motion City’s well oiled five-man pop punk machine churned out moment after moment of life affirming camaraderie, and the audience was clearly hungry for exactly what the band brought to the table. Song after song emerged from the hands of the musicians on stage, each one evoking a unique, strong emotional reaction from the packed house.

Pierre’s stage banter served to represent this equation on a smaller scale. “This song’s about needing help and getting help,” he concisely explained before launching into “A Life Less Ordinary (Need A Little Help).” “I like it a lot, and I think you all like it,” he quipped as the band smoothly glided through the intro to “Hold Me Down.” Essentially, he said, “We know and love these songs; you obviously do too. Let’s get to it and play them already.”

And play them they did. To say the band “ripped through” the setlist may be a bit of an understatement — a freight train running on pure anticipation and excitement may be a better metaphor to use here. The set included 20-plus songs spanning nearly every Motion City album, and with each one the group paid homage to that particular part of its career.

Not to overstate the sincerity of the room, though. The feeling of finality and the need to say goodbye definitely underscored the majority of the night; however, the predominant atmosphere was one of carefree fun. Of course, for those familiar with the band, it’s hard to imagine how it wouldn’t be. Some other highlights include: A lone, overjoyed crowd surfer during “Time Turned Fragile”; Pierre stepping away from his mic to let the audience sing “L.G. FUAD” back at him; the entire crowd clapping in unison on what seemed like every other song — the energy coursing through the space felt like a pot beginning to boil over.

This was all capped off, of course, by “The Future Freaks Me Out,” the crowning sing-along jewel of Motion City’s catalog. After Pierre charismatically counted in the bridge and final refrain (“If you know the words, please sing the crap out of them”), there were no tears, no resounding cries of “don’t leave us.” In fact, as the audience headed for the exits, there was an overwhelming feeling of gratitude, as if patrons knew that nothing could possibly top what they’d just seen.

Motion City Soundtrack has always been able to help block out the bad in life with their sugary, fast-paced tunes, and now they’re turning the formula back on themselves — last night, they successfully managed to let the music supersede the harsh reality of their breakup, a fitting goodbye for a band that’s always been about trying to feel better.