Pop-Punk Act NOFX Gets Introspective on Its Latest Release 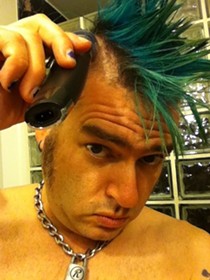 Singer-bassist Fat Mike says that when the guys in the band that would become the pop-punk act NOFX first brought him to an audition, it was simply because he played bass.

“It was weird showing up not knowing anyone,” he told us in an interview we did with him three years ago. “I went to see [the punk band] Code of Honor later that night. I didn't even think we'd actually play a show. But me and [guitarist] Eric Melvin started hanging out right away. We wouldn't practice, but just skateboard."

The band wrote two songs during that initial session. Not bad for guys who barely knew how to play their instruments. Initially, however, the band didn’t play the kind of melodic hardcore for which it’s now known. The group, which plays House of Blues on Nov. 14 in support of its latest album, First Ditch Effort, its most introspective collection of tunes to date, originally modeled itself after New York hardcore bands, even though it was based in Los Angeles at the time.

“When we first started out, we were terrible,” says Fat Mike via phone from Cincinnati where he was workshopping his rock musical Home Street Home. “We were a hardcore band, and I had no idea how to write a melody. When I got Bad Religion’s Suffer in 1988, that’s when I remembered the punk rock group that I grew up on. Instead of sounding like a New York hardcore band, we thought we should sound like a L.A. melodic band. We’re still a hardcore band, but our music is just melodic. Why we’d do it? Just because we can. Songs are better that way. Melody makes songs better — not every song — but you can’t argue against that. The most memorable music has melody. If you want to be a memorable, you have to put melody in your songs.”

From the start, the band took a DIY approach that has endeared it to punk purists. It formed its own label, Fat Wreck Chords, back in 1990. Since then, the imprint has released all of its albums.

“I always thought it was a smart way to do it,” says Fat Mike when asked about the band’s independent minded approach. “I knew that we weren’t a band that was going to be a commercially viable radio band. That’s just now who we are. Once we figured out that we would sell this many records and only draw so many people, why share the money with anybody else. A lot of bands want to see how big they can get. We wanted to see how happy we could be. That’s what we accomplished. We fucking did it right, but only for us. Green Day did it right for them, but we did it right for us.”

Fat Mike says he remembers being impressed that the hardcore group Verbal Assault sold 10,000 records and that Bad Religion sold 12,000 copies of Suffer the year it came out. But he admits that simply meant you “make no money and maybe draw 500 people at shows and sell out CBGBs.” He says the first few years were difficult ones for NOFX.

“We don’t know how we got through those first six to eight years when no one liked us and we weren’t making any money and there was no future in punk rock,” he says. “Once we got into 1991, I remember one year we made eight grand, and I thought we could live off that. Then, we got bigger and bigger each year.”

First Ditch Effort finds the band in particularly good form. As it’s put in a press release announcing the album’s release, the group explores “issues of self-loathing and mortality.” The approach Fat Mike took on NOFX: The Hepatitis Bathtub And Other Stories, the band’s memoir, influenced his approach on the album. Fat Mike says the Motley Cure biography The Dirt and Please Kill Me, a book about punk rock in New York, inspired First Ditch Effort.

“[After reading those books,] I thought we had a different story,” he says. “I told the band that if we tell all our stories, we would have a real interesting book on our hands. We weren’t thinking New York Times bestseller list, but it hit for three weeks. The reviews have been really good so we’re pretty happy about it.”

The group worked with the director who filmed [the documentary series] Backstage Passport. He interviewed the group and then he put the book together, and the band edited it.

“It’s all our stories,” says Fat Mike. “We modeled it after The Dirt, but anyone who reads it will think it’s dirtier than The Dirt. Motley Crue told the stuff you expect. The stuff we talk about is really dark. There’s murder, rape and molestation and lots of heroine and drug dealing and things you don’t think of when you think of NOFX. People think we’re a fun band, but in the '80s we used to sell acid on tour. Our drummer was a junkie for six years. We had one guitar player who would rob people’s houses when we were on tour, unbeknownst to us. There’s a lot of dark shit in there.”

To record the album, the group teamed up with Cameron Webb (Motörhead, Alkaline Trio) instead of its usual go-to guy, Bill Stevenson, who only had a few weeks available to work on the songs.

“I didn’t want to rush it,” says Fat Mike. “Cameron wanted to spend the next two months on it, so we could think about it. I was strung out on drugs at the time, and I wanted to take my time too. It worked out well. It’s a different album musically and lyrically and production-wise.”

The song “Ditch Effort,” a song distinguished by snotty vocals and snarling guitars, was the result of the band jamming, a rarity.

“We never jam,” says Fat Mike. “I teach the band songs, and we record them. With that song, I came with a riff, and we were in the same room and played it and it was cool. We used those drums from the demo and not from the studio recording.”

Call-and-response vocals give “I Don’t Like Me Anymore” a Bad Religion feel. “That jerk looks like me,” Fat Mike sneers in the self-reflexive tune.

“That’s about me, but it’s not about how I feel myself,” he says. “When I was using drugs and waking up in the morning and looking at myself in the mirror, it was like, ‘Oh man.’ I would get up and snort a line of Percocet and coke, and I didn’t like myself. I never hit big bottom like people hit rock bottom and quit drugs. It became a daily routine, and I was like ‘Fuck this.’ I didn’t want to be that person. It’s not like I really fucked up in my life. I still made this record and wrote a musical and did a book and did a book tour. I was a functional drug addict. I never did that much drugs either. I did enough to where it kept me happy but not to the point when I was all fucked. It’s hard when you have lots of money. Towards the end, I hired this guy who came on tour with us and held the drugs in a safe. He’d only give me a certain amount. It’s pretty smart.”

He says it wasn’t all that difficult to break his drug habit.

“It was six or eight days that were pretty lame,” he says. “During a lot of that time, I was hiking and surfing and exhausting myself and that helps. If you had to lie in bed for eight days and just feel how bad you felt, that would suck. I was like, let’s walk for ten miles. You stop thinking about it after awhile. It’s like that. It’s more like having the flu. You feel like shit but you wanna go do something anyway.”

While many punk bands implode after only a few months, Fat Mike says he and his bandmates continue to push forward because they have so much fun touring and recording.

“Why would you quit doing this when you have the best job in the world?” he asks. “Punk rock is the best job in the world. You play five nights a week for an hour and 15 minutes. You don’t have to practice very much. If you fuck up, nobody cares, and it’s actually kind of charming. You don’t have to answer to anybody. Being a musician is cool, but being in a punk rock band is even better because you don’t have to be perfect. We haven’t practiced yet for the tour. We don’t practice before a tour. For this tour, we have no practice. We have one sound check. It’s up to each band member to learn the songs. We won’t play them great for a while, but we will play them.”