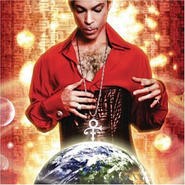 Stevie. The Stones. Sir Paul. They're no longer geniuses, but they keep making music. Since 1995's The Gold Experience, Prince has been in the same boat.

This doesn't mean Planet Earth sucks, however. One of the best axemen of his generation, Prince cranks through a Coldplay/U2 riff on "Guitar," an ode to loving his instrument more than his lady.

Ditching the synth drums that define his '80s work, Prince follows the full-drum lead established on 1991's Diamonds and Pearls. Tracks like "Lion of Judah" and "The 1 U Wanna C" are his first collaborations with Wendy and Lisa in 20 years, and they're better for them.

Planet Earth's "Future Baby Mama" comes in that model, an easy-listening ballad passé by anybody's standards, much less his. More successful is "Somewhere Here on Earth," a slow jam with muted trumpet up front, as Prince rues the BlackBerry era: "In this digital age/You could just page me/I know it's the rage/But it just don't engage me."

Until an '80s nostalgic like the Roots' ?uestlove becomes executive producer (assuming Prince will ever relinquish control), we're going to end up with mixed-to-middling records like Planet Earth.