Prophets of Rage to RNC: Fuck You 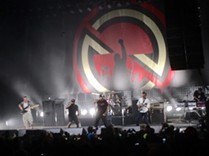 ERIC SANDY / SCENE
The capacity crowd at the Agora last night never stopped headbanging and screaming during the Prophets of Rage show, which was part nostalgia trip and part act of aggression. You can see a slideshow of photos from the concert here.

After a great set from DJ Lord, the band hit the stage with their new eponymous single, "Prophets of Rage." It's a slick tune, and right away the energy in the room exploded. The first of three massive banners dropped down behind the stage, as guitarist Tom Morello strutted almost James Brown-style among his bandmates. 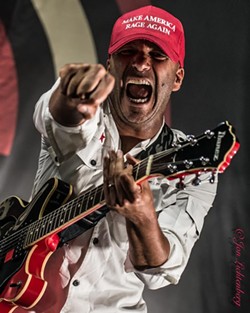 The group — Morello, Tim Commerford and Brad Wilk from Rage Against the Machine; B-Real from Cypress Hill; Chuck D from Public Enemy; DJ Lord — is a great example of how to honor the past while building something new. They're polished as hell, and the passion for this music onstage is very clear.

The band worked mostly through classic Rage Against the Machine songs — "Bullet in the Head," "Bombtrack," "Testify" — while also throwing in the iconic Beastie Boys tune "No Sleep 'Til Brooklyn" (with yet another spellbinding Morello solo). But one of the cooler moments in the night came when B-Real and Chuck D went down to the audience's level and rapped through a mashup of Cypress Hill and Public Enemy cuts: "Hand on the Pump," "Insane in the Membrane," "Bring the Noise," and more.

The two rappers were hypnotizing, joining the musicians in making this a very physical show. Commerford leaned into every note on his bass, jumping around and exuding intensity while Wilk turned his drum kit into a primal cage match. Morello, in many ways, seemed to steal the show with his spellbinding lead work and frenetic moves. Before "Know Your Enemy," he introduced the song as having been used to torture prisoners at Guantanamo Bay. Rage Against the Machine sued the State Department unsuccessfully for that one, but Morello reminded the crowd that the song still had tremendous power.

Of course, that power was aimed directly at the Republican National Convention just down the street from the Agora. Fists were raised as the band decried the conservative policies being discussed with glee inside Quicken Loans Arena.

(All proceeds from ticket sales to last night's show went to Rid-All Green Partnership, an urban farm in Kinsman.)

The climactic conclusion of the night naturally came via "Killing in the Name," which featured some explosive audience participation and the night's final banner: "Make America Rage Again."

B-Real returned to the stage briefly to light a blunt and wish us all good tidings in these wicked days.