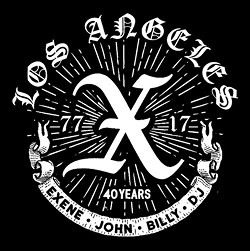 A couple of years ago, the punk band X came to town to play its first four albums over the course of a four-night stand.

The shows were remarkable and demonstrated just how well the band's music has held up — the group’s mix of rockabilly and punk remains unparalleled.

Now, the band has just announced it’ll embark on a 40th anniversary tour that includes a Sept. 26 stop at the Kent Stage.

“The secret to a long term career is to never make enough to retire,” says Zoom in a press release announcing the tour.