30 years have yet to dim the Buzzcocks' ardor. 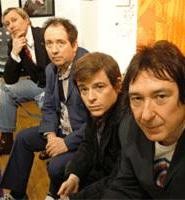 The Buzzcocks: A welcome alternative to dying before you get old.
As roadshows go, Manchester's Buzzcocks are a semi-perennial pleasure. This very month they're celebrating their 30th anniversary. (First gig: July 20, 1976, supporting the Sex Pistols at Manchester's Lesser Free Trade Hall.) They're lauded as buzzsaw-punk pioneers of the first rank while also garnering admiration as a melodic pop group of the highest order. With such an unusual, near-patented mix, their nonstop-action concerts remain wonders of sing-along adrenalin, as adoring crowds of mixed ages pogo and bellow their famous backing "whoa whoas."

Shelley and Diggle get happier, chattier, more appreciative, and louder, the more they imbibe. In short, they're the perfect party hosts, and every New York stop of their innumerable tours (going back to their memorable inaugural U.S. jaunt in August-September 1979, with the equally amazing Gang of Four) feels like a bitchin' bacchanal, from the pass-only after-show meet-and-greet to the tour-bus ride to a local watering hole, with followers crammed into the narrow aisle. For members of a group that disbanded for eight years (1981-1989), they still act and feel like a modern Lazarus, squeezing every drop of thrill from an unexpected, protracted second act that's lasted 17 years.

Diggle won't waste our time denying it. "I mean, it's almost like we've been reborn," he exclaims, genuinely amazed. "We've gone beyond the pain threshold of touring where everything is a problem -- like finding a toothbrush or whatever -- but it's almost like tying yourself to the mast and seeing things differently. You get used to riding the wave. With the wealth of our experience touring, we've gone past stuff. We're getting on with it.

"This is going to be a long haul." He smiles more than sighs as he sips his drink, reflecting on his status of road warrior at 50, while he shows off the bus digs. "It's already been three and a half months [in Europe] before we came here. That reflects the passion on the stage."

They shame the 20-year-olds who open their shows by appearing more boisterious and enthusiastic -- Diggle especially, his Cheshire-cat grin lighting up halls coast to coast. "It's weird, I think that's true. When we get on the stage, we have a kind of laugh. When we started out, it was quite intense; it was a serious business. But life's too serious to be so serious!"

Chuckling, he opens a beer and salutes this lifestyle that, minus the drugs and hookers, is something John Entwistle would relish. "Yeah, me and Pete are always the last to leave some bar or other!" Diggle says, taking another sip. "It's in our nature; we've been doing it since the first. Maybe as we get older, we think we'll take it easier, but we're still the last, after all the friends and fans have left. We're mad poets here. We've embraced the vibe and greatness onstage to the party afterward. We push ourselves into oblivion; we really feed on it. This amazing insight into life comes. You see more things in it."

These epiphanies have translated to the newfound commitment in their two most recent LPs, 2003's Buzzcocks (Merge) and March's Flat-Pack Philosophy (Cooking Vinyl), both of which revert to the style of their original golden days and their surprisingly sharp 1993 comeback, Trade Test Transmissions. To wit, it's a gutsy move, opening shows with seven straight songs from the new LP, but with the drive and energy of Shelley's "Wish I Never Loved You" and Diggle's "Sell You Everything," they pull it off, judging from the audience's applause. From there they launch into a string of old classics, Ramones-style, rapid-fire, one right into the next.

"It feels like we're on the road to a new kind of greatness, from the black album [Buzzcocks] to this LP," says Diggle. "It's like a completely new band again. It's given us a new excitement. We're rejuvenated; we've figured out what we are again. The last two LPs may sound a little similar to the old stuff, but I think they only could have been made now. It's like a future sound, not an old sound. You never know where we'll stop, so we're pushing it hard."

So much for getting slower as you get older. "The older you get, the easier it is to get angrier and meaner," he contends. "It becomes a bigger picture, a Proustian panorama. That kind of theory, that bands burn out, was like a post-hippie thing, where they took too much acid and got tired! There is a sense that we can still play fast and furious music like at the beginning. And we thought, if everyone else is going to sound like Buzzcocks, then we might as well! We were exploring other avenues [1999's obscure Modern], but now we've kind of returned to the well we started in. And I'm still really excited about writing again."

They won't have the chance to do that for a while. The bandmates roll on for two more months, including 13 dates on the Warped Tour, blowing bands half their age clear off the stage, according to reliable accounts. When Mr. Diggle is sighted again, he's getting off the bus at the unlikely Verizon Wireless Amphitheater in Bonner Springs, Kansas, and it's easy to imagine him blinking his distinctive, near-Asian eyes in the sunlight of the endlessly flat prairie.

"It's the first time for us doing the Warped Tour," he says. "Every band has been very respectful to us. And so many kids in the crowd. Yeah, you know you do these signing sessions, these little girls come up who weren't even born when we put out our third LP [1979's stunning A Different Kind of Tension], let alone our first; they've just seen us for the first time. We've had to sign T-shirts for their dads; they have to take them home after the show!"

Diggle reveals that he has tried unsuccessfully to visit the Rock Hall on previous tours through Cleveland -- but what he'd really like is to be inducted into the joint. "Maybe one day we'll make it. Maybe one day they'll welcome us in there. We just got an 'Inspiration' award from [English rock mag] Mojo, our first award ever after 30 years. It's a great honor."

If they keep at it as furiously as they have, it's only a matter of time.