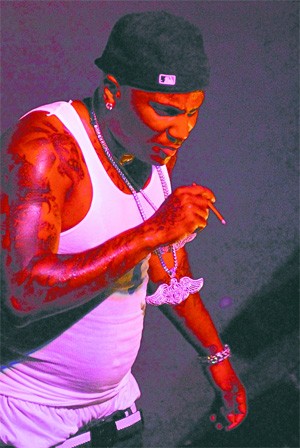 Wanda Santo-bray
Young Jeezy raps about yayo at the Agora.

Vans Warped Tour founder Kevin Lyman, one of the most influential and respected figures in the music business, has personally invited Gil Mantera's Party Dream to play the entire festival trek this summer. The Youngstown duo will perform extra-long sets in the Skull Candy Mix Tent.

"They put you in a good mood," says Lyman. "Plus, they're fun people to hang around. I think kids will be walking by and see Gil Mantera, and say, 'Oh my God, this is what I've been looking for.'"

After 10 years, things are starting to click for the group. In 2005, Akron's Audio Eagle Records released the new-wave revivalists' third CD, Bloodsongs, which was produced by Shane X. Conry, whose remix of Madonna's "Nothing Fails" hit No. 1 on the Billboard dance chart. Conry returned for Gil Mantera's new album, tentatively titled Dreamscape.

The first single, "Ballerina," should be available via iTunes by Warped's June 20 kickoff. A 12-inch vinyl version will follow on Florida's Fighting Records. Frontman Richard "Ultimate Donny" Bernacki says the track reflects the band's maturing sound. Seeped in analog flavor, it's a continuation of the duo's authentically retro '80s synth-pop. The track plays like a dance-club remix of Stevie Nicks' "Stand Back," with a new emphasis on guitar, fewer wiseass lyrics, and a surprisingly poignant musical edge. No release date or label is in place for the album.

Gil Mantera will be in fighting shape by the time the Warped Tour launches. The duo has been on the road, playing shows with goo-soaked theatrical metal cult heroes Gwar. It's an odd match, but Donny and keyboardist-singer Gil Mantera put on some of their best shows for belligerent Cleveland crowds before the city warmed to them.

"It feels really good," says Donny of the Warped invitation. "Our plan is to attack it so hard on the first week, people are going to start saying, 'You have to go check out these assholes.'"

• From the Top, PBS' weekly music-education show, hosted by Cleveland-based pianist Christopher O'Riley, has been nominated for three technical Emmy Awards. Season two, now airing, is directed by Gary Halvorson, best known for his work on Friends. Visit www.christopheroriley.com for free MP3s of O'Riley's classical-piano covers of songs by the Smiths, Radiohead, and others.

• Akron Earthworm Collective has given up looking for a new home. The DIY club/clubhouse, which opened last summer, hosted movie nights and free, loud underground shows. The Collective shut down in January following noise complaints.

• Thursday Club plays Pat's in the Flats (West Third and Literary Streets, Tremont) on Saturday, May 31. It's billed as one of the crew's last shows; the Cleveland noise band has been releasing DIY CDs since 2003.