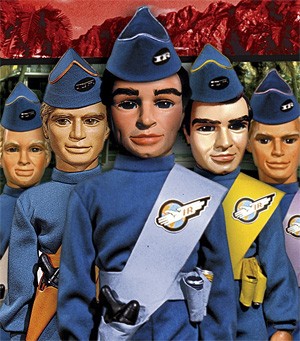 Thunderbirds: Stiff acting all around.

TOP PICK — Thunderbirds 40th Anniversary DVD Megaset (A&E)
The endearingly chintzy Thunderbirds TV show from the 1960s centered on a hella-rich astronaut and his five sons, as they hopped around the galaxy with a bunch of futuristic gizmos. The best part? They were puppets. This 12-DVD box includes all 32 episodes of the British "Supermarionation" series' run, plus a bevy of geek-approved extras. It's like an outer-space Team America: World Police, but without the puppet sex.

TV — CMT Crossroads: Robert Plant and Alison Krauss (CMT)
This intimate concert (airing at 8 p.m. Monday) features stellar performances by the Led Zeppelin frontman and angelic-voiced country singer, who run through a number of songs from last year's terrific Raising Sand. They also haul out two Zep classics, "Black Dog" and "When the Levee Breaks," which end up sounding like old field songs, on par with the album's haunted Americana.

VIDEO GAME — Soldier of Fortune: Payback (Activision)
This post-Halo first-person-shooter (for the Xbox 360, PlayStation 3, and PC) doesn't offer much in online multiplayer mode — just the usual deathmatch buffet. But the one-player campaign — about a mercenary taking on explosives-equipped madmen who want to take over the world — is a sufficient time-killer. We especially like the brutal amount of carnage that can be inflicted on the bad guys. A bloody good time!

CD — Spice Girls: Greatest Hits (Capitol)
The British girl group recently launched a reunion tour, a decade after their last hit. This 15-track compilation — 13 oldies plus two new songs — ties in with the shows, but it also serves as a tidy summation of the Spices' brief chart run. While much of their material was faceless fluff, it was also sassy radio fun — a much-needed break from the airwaves' whiny rap rockers and bling-minded rappers. Plus, "Wannabe" still rocks. Zigazig ha!

TV — The Whitest Kids U'Know (IFC)
These YouTube sensations (do yourself a favor and Google "Slow Jerk") now have a weekly TV show, which premieres at 11 p.m. on Sunday. The sketch-comedy troupe takes its cue from groups like Kids in the Hall and the State, but they're less brainy, more raunchy. This week's highlight is a skit called "Sam's Nut," which is about some dude's slippery testicles.

COURTESY FLUSH, PLEASE — Daddy Day Camp (Sony)
Remember when Cuba Gooding Jr. won an Oscar? Remember when he was still landing roles in movies like As Good as It Gets and Pearl Harbor? This totally unfunny kids' flick (now out on DVD) pretty much buries the Jerry Maguire star's career once and for all. He plays the head of a summer camp, where wild animals create havoc, kids puke, and adults take multiple hits to the groin. We know exactly how they feel.