Pyro De Mayo at Nelson Ledges: Nahko and Medicine for the People Bring Their Vision 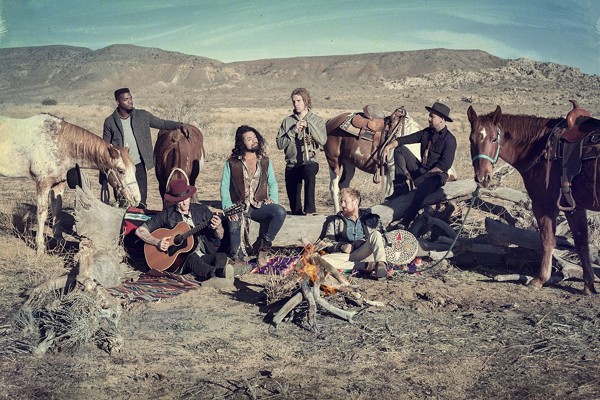 The last time Nahko Bear played Nelson Ledges Quarry Park in 2012, he was, by all accounts, a different and younger man. He was gigging solo back then — “I had a blast,” he says now — and the great wheels of fate were only just beginning to spin him toward his current musical journey. That weekend, he received a strange email from a clairvoyant who said she had met him in a dream 10 years prior.

“I was like, this is kinda weird,” he tells Scene. “First of all: How’d she get my email? But second of all: This is kind of intriguing to me.” From there, the story spans a year with Nahko traveling to Alaska, getting in touch with the woman, meeting her in Los Angeles, inquiring further about her visions. “Over the course of that summer, I watched what she had told me come true.”

That story landed lyrically in “It Is Written,” the third cut on Nahko and Medicine for the People’s upcoming album, HOKA.

Nahko returns to Nelson Ledges next weekend with his band in tow — headlining the first-ever Pyro De Mayo festival (formerly Firedance). Also on the bill: The Werks, Cas Haley, John Welton & The Awakening, The Almighty Get Down, and a hell of a lot more.

It’s a fortuitous time for the quarry to link back up with the worldly musician. Drawing on his Puerto Rican, Apache and Filipino descent, Nahko has always infused his music with a healthy dose of perspective and self-actualization. Now, after having encountered synchronous tribulations and joys over the three years since his last album dropped, Nahko is beaming more brightly than ever.

Where the brilliant Dark as Night showcased Nahko’s voice as a young man on the far side of a breakup, he says he feels more mature now and more aware of his overall aim as an artist. The last album was one that reveled in the yin-yang duality of darkness and light; there’s pain and ecstasy throughout that trip. “There were very personal stories of my coming-of-age and, you know, it’s a very in-depth look at that journey and traveling and running away and coming back in,” he says.

This newest album now captures forgiving moods and forward-thinking fortitude. (“Hoka” is a Lakota word for “Let’s go!” It’s a call to action.) The first singles — “Make a Change” and “San Quentin” — portend a dynamic and expansive album, with the latter representing Nahko's trip to San Quentin State Prison to meet the man who murdered his father.

But don’t mistake that sort of narrative fodder for wearisome, heavy introspection. Nahko’s gift has always been one of simplicity: He’s capable of stripping down some of the bigger and most universal threads of life and gilding them with upbeat, inventive twists on easy-going chord progressions and funky leads. You can’t listen to his stuff without smiling and dancing.

“I was just really happy to finally get to record a handful of these songs that have become favorites via Youtube and to take them into a writing circle with the guys and flesh out how to play them together as a band. I had been playing them solo for years,” he says.

With that in mind, though, there’s even more to this one: Nahko found himself writing from within the wonderful cloud of falling in love.

“I was able to finally write love songs, and that had been such a hard thing for me to do — to convince myself that I could tell a true story through the experience of love,” he says. “I was really happy that we were able to place some of those tracks on this record, to express that feeling that all of us seek and all of us live in and all of us want to know and understand more.”

In that thought is the present culmination of years of songwriting. Nahko started playing piano at six. He stuck with it, grew up, and began blending music into his budding surfer lifestyle on the west coast and in Hawaii. By now, there are plenty out there who would call what he and his band are doing a “movement” — the sort of socially conscious umbrella that hangs over a band’s music, one that calls to mind the legacy of Bob Marley and Wailers.

They’ve toured all over the world, with dates in Europe again later this summer and a planned gathering in celebration and advocacy of the Winnemem Wintu tribe in northern California in September. That tribe has relied for generations on salmon in local waters, the population of which has been severely hurt by local producers injecting fish with pork and chicken. “Frankenfish,” Nahko says, and they grow so large that they then eat the natural salmon, depleting the tribe’s source of life.

The plan: a bike ride inland, a paddle upriver and a run to Redding, California. There, Nahko will lead a horseback ride to the river. “In doing that, we’re basically doing what a lot of indigenous people do when they do prayer runs,” he says. “It’s a circle. We’re praying along the way for the return of the salmon.”

But before all that, Nahko and the band will arrive at Nelson Ledges.

Joe Pirtz, manager and promoter at Nelson, tells Scene that this festival is shaping up to be unique in every way — a deep celebration of the pure act of artistic creation. In a sense, it’s a righteous kickoff to the venue’s always-enticing lineup of summer music fests. (Pirtz should know; he’s the cat behind Music Festival Junkie, a broad community platform for those who revel in the scene. He started promoting festivals in 1996, and he’s remained hooked.)

“The stars really just lined up for this,” Pirtz says. “I decided to do this because I really believe in Nahko’s music and message.”

The weekend itself moves way beyond that, though. Picture: three geodesic domes that will house artistic workshops, along with interactive creations that will blend into the trees at the park. There will be a silk screen press on-site, a sound wave workshop, fire spinning lessons, tie-dye workshops, and video mapping across the front end of the grounds. Throughout the weekend, a massive effigy will be built in remembrance of Norman Dimitrouleas of The Werks, who died in January, and the sculpture of fire will also serve as “a projection of the future” for all in attendance, Pirtz says.

“Coming into Pyro, it’s going to be a creatively developed weekend,” he adds. “It’s an artistic gathering of all our tribes — such a monumental experience.”

Get tickets and read up on the rest of the offerings here.

“I think that last year I took some big, big steps in the direction I’ve gone,” Nahko says. “I am the master of my destiny, so what am I gonna do?”

Pyro De Mayo sounds like a great step along the way.