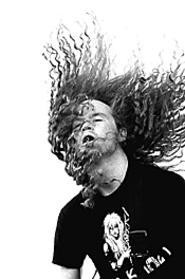 "I didn't sit back and plan to form a band," says Vazzano, who also plays guitar for Cobra Verde. "I have insomnia, so I spend a lot of time staying up, strumming a guitar, writing songs. I bought a four-track to record some of the songs so I won't forget them. I wanted to play them live, so I recruited [three] guys. And we enjoyed it so much, we kept getting together."

Quazimodo formed in 1991 and disbanded in 2001, after being named band of the year by Scene readers in 2000. The new project, Vazzano says, bears similarities to Quazimodo. "It's straight-ahead rock and roll. I have elements of blues and country and punk floating around in my head, but it's rock and roll."

· Rikets, the hard-rock band featuring members of Switched, the Bedroom All-Stars, and Erase the Grey, makes its live debut September 4 at Peabody's with Shenoah, a melodic modern-rock band that features Erase the Grey programmer Jeff Butchko and guitarist Vinny DiFranco. Rikets singer Scott Rose says there's no bad blood between the former bandmates, who are planning a split release.

"I never thought it was smart to hold grudges," says Rose. "At first, everybody's a little hot, but you get over it. Life's too short."

Shenoah is booking a fall tour. Both bands will soon make their recording debuts. Visit www.shenoah.net and www.rikets.com for new songs.

· The legendary Akron art-punk group Devo will release the concert DVD Live in the Land of the Rising Sun: Japan 2003. The band has played New York City, Los Angeles, and Portland this year, and has a sold-out show at Chicago's Riviera Club on September 24.

· Subtones guitarist C.J. Gunn and former Misfits singer Michale Graves are looking for a rhythm section to form a Misfits cover band. The subject came up at a recent Symposium show, where the Subtones opened for Graves's band, Gotham Road.

"Kids are hungry for the Misfits material, so we've been talking about it," says Gunn. "We want it to sound like a record, as opposed to when you go and see the Misfits now. It sounds like a pile of mud."

Gunn also plays with Marky Ramone, and the two have had success with all-Ramones shows. Gunn would like to base the band in Cleveland and play regionally, with the New Jersey-based Graves joining them to rehearse shortly before live dates. Gunn can be reached at [email protected].