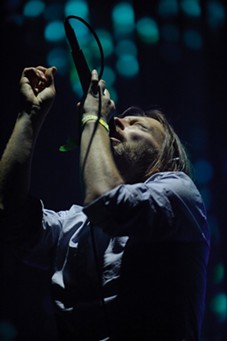 Steve Keros
Radiohead's Thom Yorke
It’s rare that rock acts receive nominations into the Rock Hall during their first year of eligibility. But this year’s list of nominees includes two bands — Radiohead and Rage Against the Machine — that have done just that.

Given that their 1997 album OK Computer stands as one of the best albums of the '90s, Radiohead seems like a shoe-in for induction.

To be eligible for nomination, an individual artist or band must have released its first commercial recording at least 25 years prior to the year of induction.
Nine out of 19 of the nominees (Eurythmics, Dire Straits, Judas Priest, Kate Bush, the Moody Blues, Nina Simone, Radiohead, Rage Against Machine and Sister Rosetta Tharpe) are on the ballot for the first time.

The Rock Hall will send ballots to an international voting body of more than 900 artists, historians and members of the music industry. According to a press release announcing the nominees, "factors such as an artist’s musical influence on other artists, length and depth of career and the body of work, innovation and superiority in style and technique are taken into consideration."

The Rock Hall will offer fans the opportunity to officially participate in the induction selection process. From now until 11:59 p.m. EST on Dec. 5, 2017, fans can visit rockhall.com/vote to cast votes for the act they believe to be most deserving of induction. The top five artists, as selected by the public, will comprise a “fans’ ballot” that will be tallied along with the other ballots to choose the 2018 inductees.

The 2018 Inductees will be announced in December. HBO will once again broadcast the ceremony, which will be held at Public Auditorium on April 14, 2018. More details and ticket on-sale information will also be announced later.