R&B/Pop Act TLC to Headline I Love the '90s: The Party Continues Tour 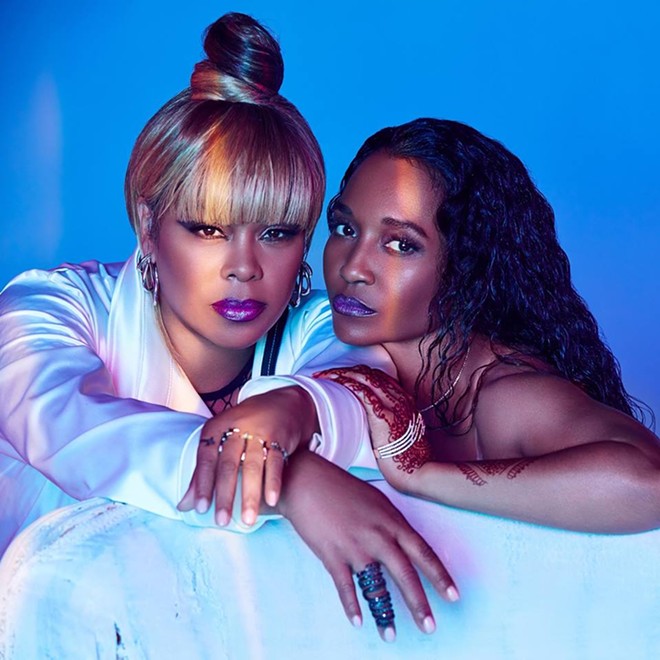 Facebook.com
Formed back in the early '90s in Atlanta, the girl group TLC delivered a total of nine Top Ten hits as albums such as CrazySexyCool and FanMail became chart-topping hits. Only the Spice Girls sold more albums during the time period.

Now, the R&B/pop band, which includes singers Tionne "T-Boz" Watkins and Rozonda "Chilli" Thomas, has just issued TLC, its first studio album in 15 years. The boisterous opening tune, "No Introduction," finds the duo reciting its past achievements to a beefy bass riff and layers of backing vocals. It serves as a defiant announcement of the group's return.

In a recent phone interview from an Ottawa stop on the I Love the '90s: The Party Continues tour, Watkins and Thomas spoke about the band's recent rebirth.

When the group first formed in 1992, what did you hope to achieve?
Thomas: For us, we were so happy we were able to do something that was a dream. We were just excited to perform. That’s what most people who want to be singers are excited about. After that, we hoped that everything that people liked us.

The band’s image had a tomboy quality to it. What inspired that look?
Watkins: One of the things we wanted to do from Day One was to be trendsetters. When we were younger, it was different for women to dress in men’s clothes. We loved wearing our BVDs. The tomboy naturally came from standing up for the girls who did dress like that and were still just as sexy. We made a statement as well that you can be just as sexy wearing baggy jones. Today, too many people look alike. No one has any individuality.

CrazySexyCool became such a big hit. Talk about what it was like to record that album.
Thomas: It’s so funny because when we recorded that album we decided to not be in the studio at the same time. We didn’t want to have to wait to get everyone in the room at the same time. For the first album, we would be in the studio until six in the morning. It was crazy. We realized we didn’t need to do it that way. I can’t remember when Lisa came up with the title, but she came to us and told us that she had the title. It’s obviously clear to some people why each person has that name. That was our version of “I’m Every Woman.” Every woman has a crazy, sexy and cool side. One may be more prominent than the other, but everyone has all three. I think too that when that album was done we were excited because we thought it would be a big album for us. That was the sophomore album, and you always hear about the sophomore jinx. We were always nervous because we are humble and don’t take anything for granted, but we felt very good about the work.
Watkins: We were overwhelmed. When you do your first album, you have to figure out how to do it and then you need to evolve and move on to bigger and better things. That beccame one of our most iconic albums..

What’s the story behind “Waterfalls.” How did that song come to be?
Watkins: Some guys I grew up with came up with the concept. AIDS was an epidemic. People weren’t talking about it. We had some deep conversations about it. It’s amazing how it came together and that we could talk about something so heavy, and it really did work. I think the video is what set it off. Listening to the song, some people might not have gotten it. But the video made its meaning clear. Million dollar videos weren’t being made back then unless you were Janet or Michael [Jackson]. We all got to do our own concept for the video. I remember [music executive and producer] Clive Davis not wanting to do the song. He didn’t believe in it. We went to [producer] L.A. Reid to get the support. We all got what we wanted out of it. That’s one of the videos I’m most proud of. A lot of [AIDS] patients said they thought we were their voice and speaking up for them.

Talk about what it was like to have to deal with so many lawsuits and internal issues.
Thomas: It was the contract we were in. We’re the biggest-selling female group, and we didn’t have any more. We needed to know what was going on, so we filed for bankruptcy. People thought we were doing it just to do it because all they could see was the success. It was the contract. We had to go that route. We weren’t afraid to go that route. We had to put that information out there. The labels wanted to settle, but the number was in insult. We stuck to it and won.

What got you through that period?
Watkins: I feel like from Day One being in TLC. There’s always been some kind of drama. Pebbitone Records giving us pennies here and there. It was always a struggle. You had to make due. We never had a chance to truly enjoy our success because with each album it was always something. That’s been the life of TLC, but we would always overcome every obstacle.
Watkins: With everything in life, you need to do what you need to do to win. You can’t just settle. I feel like we’re survivors and fighters.

Left Eye’s death was so tragic. How did you react to it?
Watkins: Same thing as the bankruptcy, except way worse. I don’t think Lisa would have wanted us to stop. It was hard because you to learn to heal. Once we started to heal, it didn’t stop Chili or my ability to dance and perform. We needed to figure out what to do. We represent her in everything we do, so that’s what we do.

Your Kickstarter campaign for the new album was highly successful. What was your reaction to the support you received from fans and musicians alike?
Thomas: Shock. It was amazing. We were so surprised that we could not believe it. We broke the record. It was like, “Are you kidding me?” We were so grateful and thankful for our fans. We wanted them to be a part of this album. Through the years, we heard everyone say they wanted a new album. We did the Kickstarter compaign and they truly got involved and with some of our peers contributing, it was unbelievable and we couldn’t wait to get into the studio. There was extra pressure. It was like, “Oh my God. Can we deliver?” It was an overwhelming, in a good way, experience for us.

Talk about making TLC. What was the experience like?
Watkins: This one was a lot of pressure. I’m not going to lie. We were both pretty nervous. You have to make the songs come to life. We worked with some new writers. After 15 years of not having any material out like that, there was so much pressure because people expect you to stand up to your standards. After we started to work on it, it started flowing and pouring out.

The opening tune “No Introduction” has a sense of urgency to it.
Watkins: It’s funny. That song started out as an interlude. It was so jamming that we realized it needed to be more than just an interlude. It needed to be a song. I love when the bass hit. It makes me smile real hard. We say some cocky type of stuff and you can only get away with something like that when the beat is jamming. I think it was done in a tasteful way.

Is it really your last album?
Thomas: It’s the last record, but it’s not the last of TLC. We hope to have a residency in Las Vegas and put on a helluva show for everyone to come out and see us there. That will be very exciting and I think people will be happy to be able to come out and see us there.
Wakins: I agree. We have a great body of music, and I would love to continue to play those songs.