Sigur Rós and Godspeed You! Black Emperor battle for your anarchic buck. 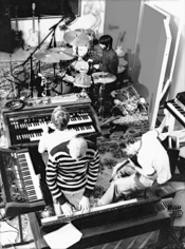 Sigur Rs: What Radiohead desperately wants to sounds like.

Hit the deck, ultra-pretentious art-rock aficionados! The two biggest names in psychedelic weirdness hit town this week, guaranteeing street prices for hard drugs will skyrocket, along with clinical cases of paranoia and sightings of Jesus. But who's truly worth your money? The high-concept orchestral rock of Godspeed You! Black Emperor or the bombed-out-of-your-gourd sleepwalking majesty of Sigur Rós? Perhaps an elaborate-ass Tale of the Tape is in order:

Godspeed You! Black Emperor: Randomly chosen by combining words in the Canadian Anarchist Collective Magnetic Poetry set. Put the exclamation point after Emperor if you want.

GYBE: Montreal, land of wild moose, Labatt Blue, and people who actually care about the NHL.

GYBE: In 1984, self-releasing 33 copies of a cassette titled All Lights Fucked on the Hairy Amp Drooling.

SR: Released Von in '97, distraught that the album title All Lights Fucked on the Hairy Amp Drooling was already taken.

SR: Nearly comatose single "Svefn-G-Englar" (the "it's yoooooou" song) propelled 2001's Agaetis Byrjun to hipster stardom. Its inclusion on the soundtrack to Vanilla Sky is the only thing good about that flick.

GYBE: No vocals -- just occasional tape loops. Example: "The car is on fire and there is no driver at the wheel. And the sewers are all muddied with a thousand lonely suicides . . . we're trapped in the belly of this horrible machine and the machine is bleeding to death . . ."

SR: Lyrics all sung in "Hopelandic," a made-up language consisting primarily of eeeeeeeeeeeeee's and oooooooooooo's. Most of the lyrics on ( ) sound like "you sigh," "ewes, hi," or "youse high."

GYBE: Limited mainly to live show tape-trading. Hard to idolize a band when you wouldn't recognize its members if they kicked your ass on the street.

SR: The devout are encouraged to visit Sigur-Ros.com and supply their own lyrics to ( ), which leads to highly amusing interpretations: "Swans are cool/The fires rage/Isä ja/You will/Although things are bad/There is a hope/You say you all alone by the fire/It's on."

SR: Understated. Just a "Stop the War in Iraq!" pop-up window on the website.

SR: That magical Teletubbies fairy land where the sun's, like, this baby's face.

GYBE: Packing 10 or so musicians on a tiny-looking stage; forcing concert reviewers to buy their own tickets (all proceeds benefit an adult literacy organization).

SR: Members lying down onstage during shows and staying there for, oh, 20 minutes.

GYBE: Rarely consents to press interviews and nearly always regrets doing so. After the Radiohead-slagging piece appeared in the Dutch rag OOR, Godspeed responded with an open letter referring to the interviewer as "a lost, weak, lonely man, and I felt a fair amount of misguided empathy towards you . . . I now regret feeling anything at all, and I wish you nothing but continued misery, loneliness, and despair."

SR: It's all about the rarely granted, uncomfortably conveyed love.

Verdict: Go see 'em both. They're the closest thing to pure punk rock we've got left.